The gender divide at university 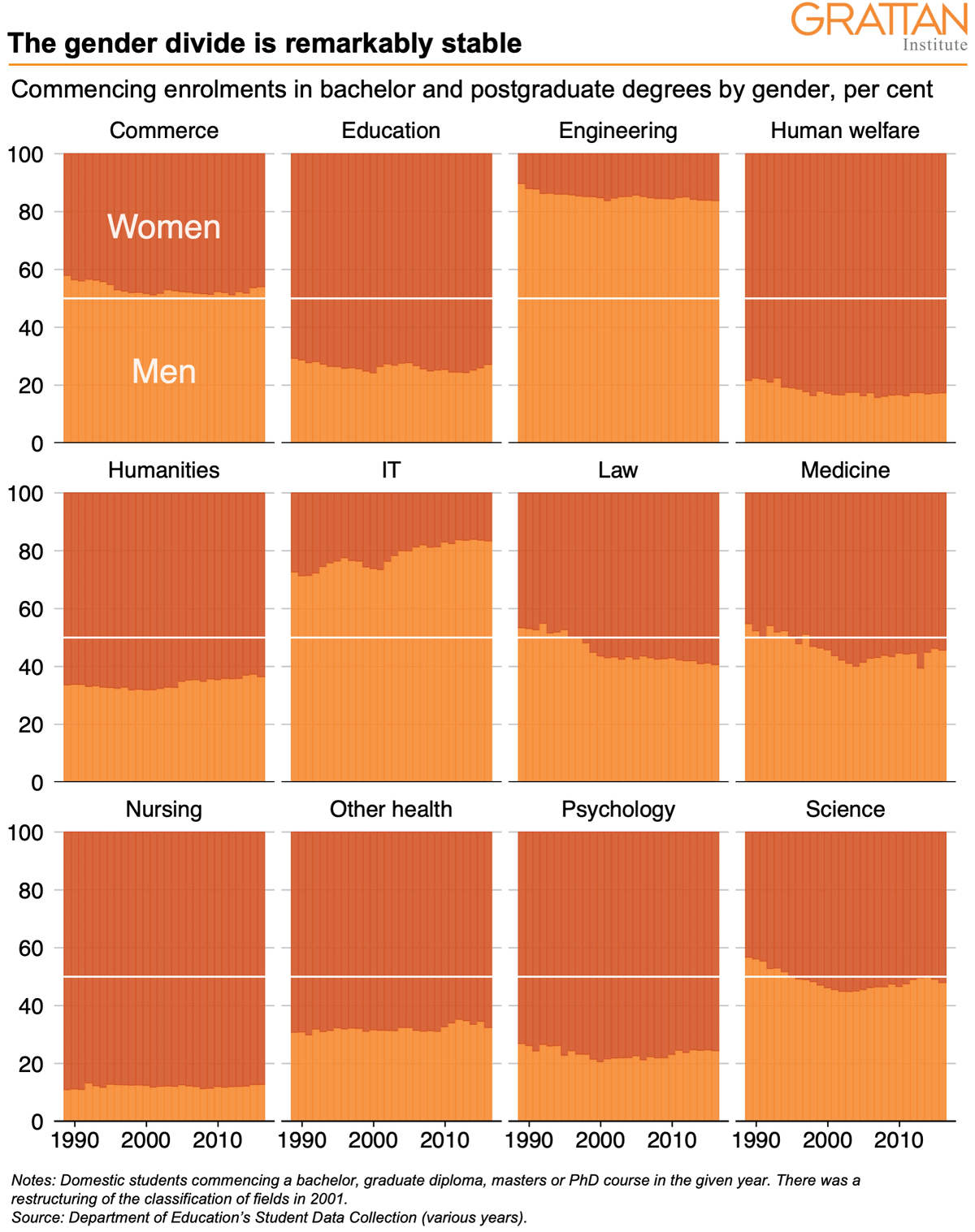 Commerce and science, two particularly large and broad fields at university, are evenly split between men and women. But the figures below show there are differences between subfields.

In science, more women do biology, and more men do physics and maths. 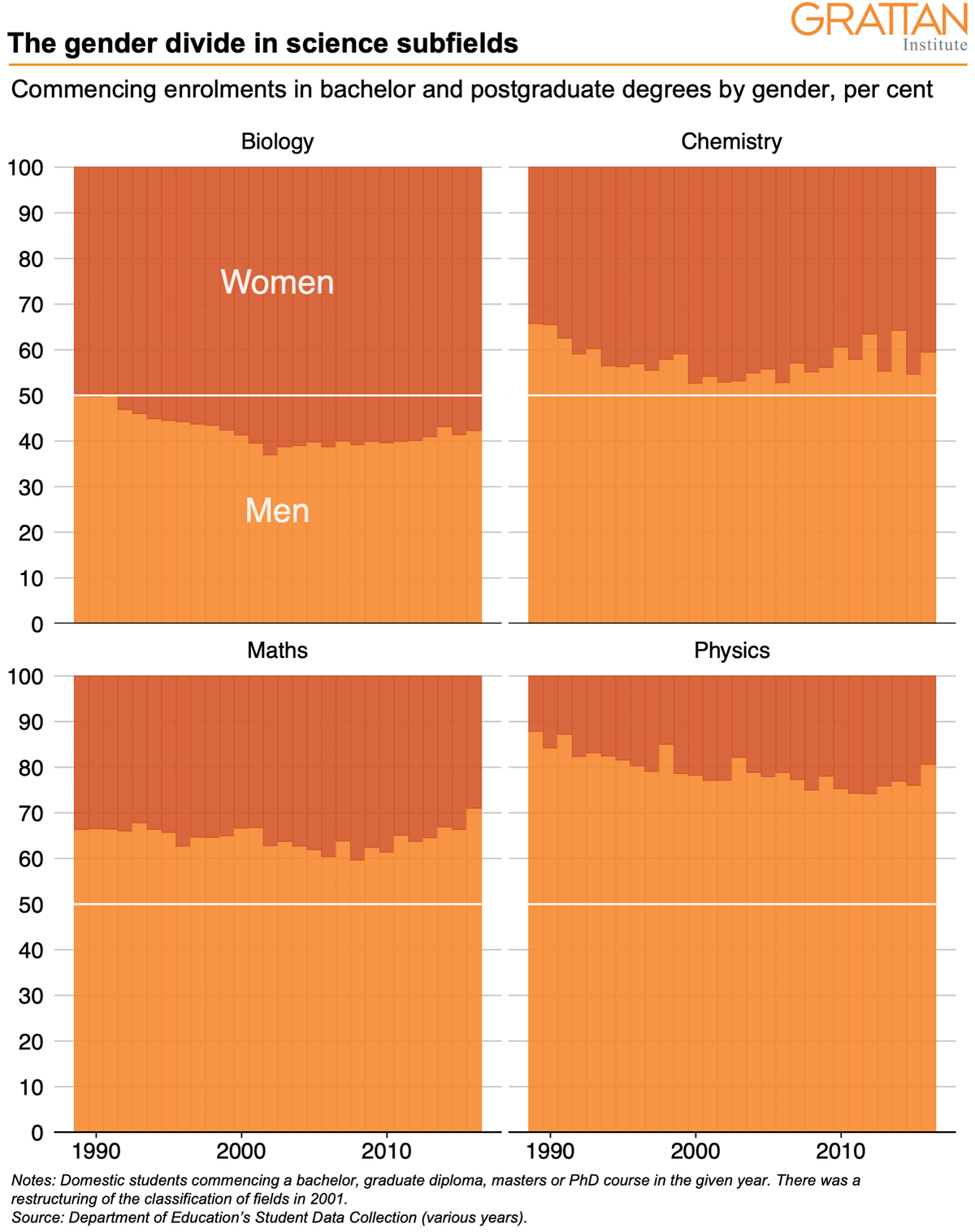 In commerce, the figure below shows that roughly equal numbers of men and women do accounting and management, but many more men than women do economics and finance. 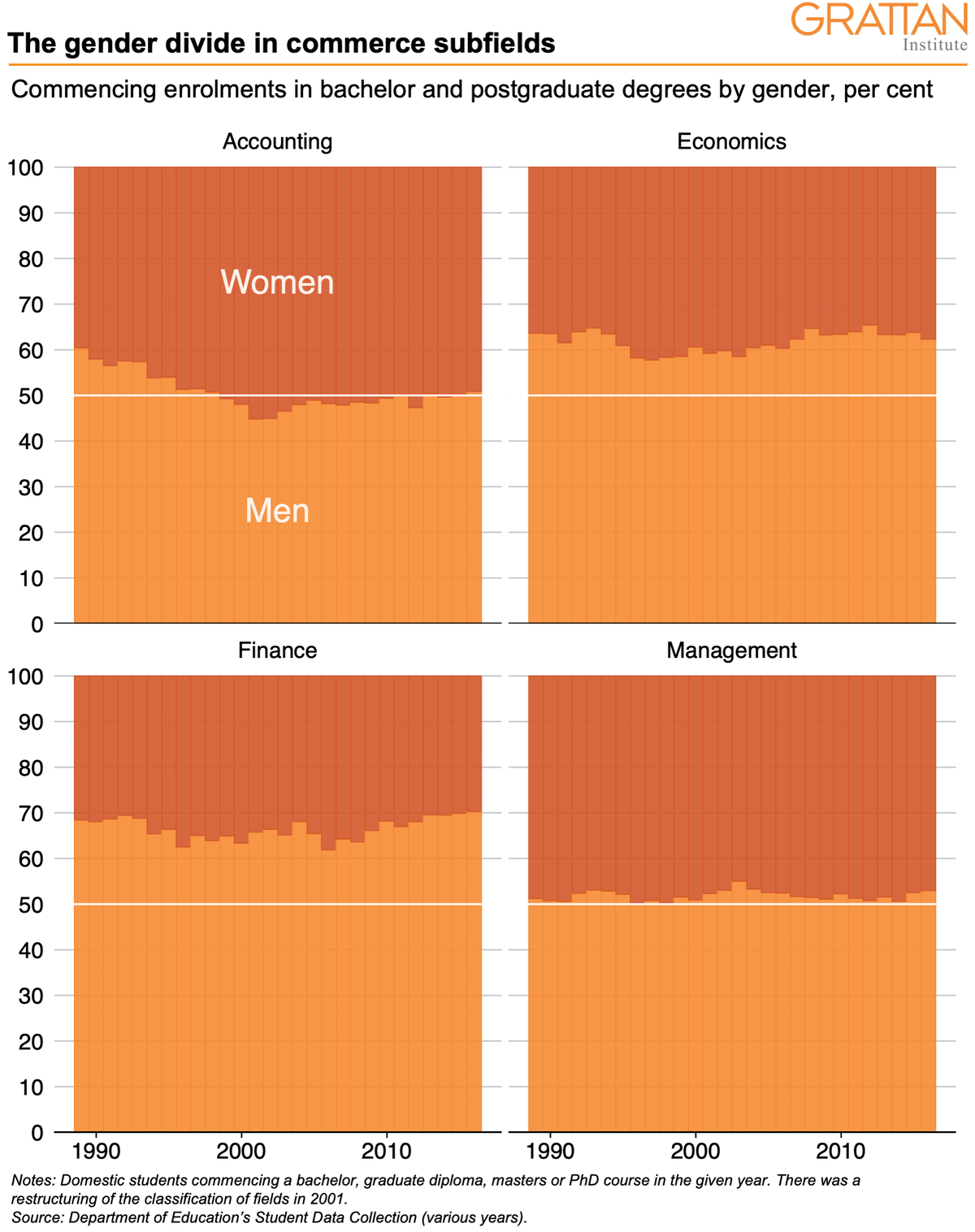 Sharp gender divides in university fields can limit young people’s choices. Inspired by the women and men they see while growing up, and the societal nudges they receive, girls still want to be teachers, and boys still want to be engineers.2

Gender-dominated courses lead to gender-dominated occupations, which come with their own challenges. Men and women who buck the trend can find it more difficult to get a job in their chosen field.3 People in a workplace dominated by the opposite gender can find it harder to find mentors and get career support.4

Women who work in male-dominated industries, especially, can face exclusionary or sexist working environments.5 And these occupations often offer inflexible working conditions that can lead women – who are still overwhelmingly the primary carers of children6 – to choose a different, often lower-skilled and lower-paying occupation.

When previously gender-dominated fields achieve greater gender parity – when they are no longer regarded as a ‘male’ or ‘female’ domain – those fields become more attractive to more people. It means fewer girls will see nursing as their only way to help people; and more boys will feel that teaching is an option for them. It means more life choices for young Australians.

There’s still a way to go.

1. The Department of Education collects enrolment, completions and subject data from all universities, including the field of education and gender variables used in this analysis. Fields of education presented here are derived from commencing bachelor and postgraduate student enrolment fields, which are coded according to the Australian Standard Classification of Education (ASCED). Gender was recorded as male or female between 1989-2013.  In 2014 the reporting guidelines were updated to include an option for non-binary gender in line with the Australian Government Guidelines on the Recognition of Sex and Gender, too recently for presentation in this analysis.

6. In 2016-17, more than 95 per cent of primary parental leave – which is most likely to affect people’s career trajectories – was taken by women: ABS (2018). More than 80 per cent of mid-career Australian women has at least one child: Grattan analysis of ABS Census (2016).