There's a lot more to retirement incomes than super

The now-completed Retirement Income Review was asked to evaluate how the system works as a whole. But reading many submissions to the Review, you’d be forgiven for thinking there’s not much more to retirement incomes than superannuation.

Grattan Institute has analysed the 125 submissions by organisations. Overall, these submissions mentioned superannuation nearly 13,000 times, but the aged pension was mentioned only 7,500 times. And other issues that affect retirees’ living standards – such as aged care and rent assistance – were mentioned still less often. 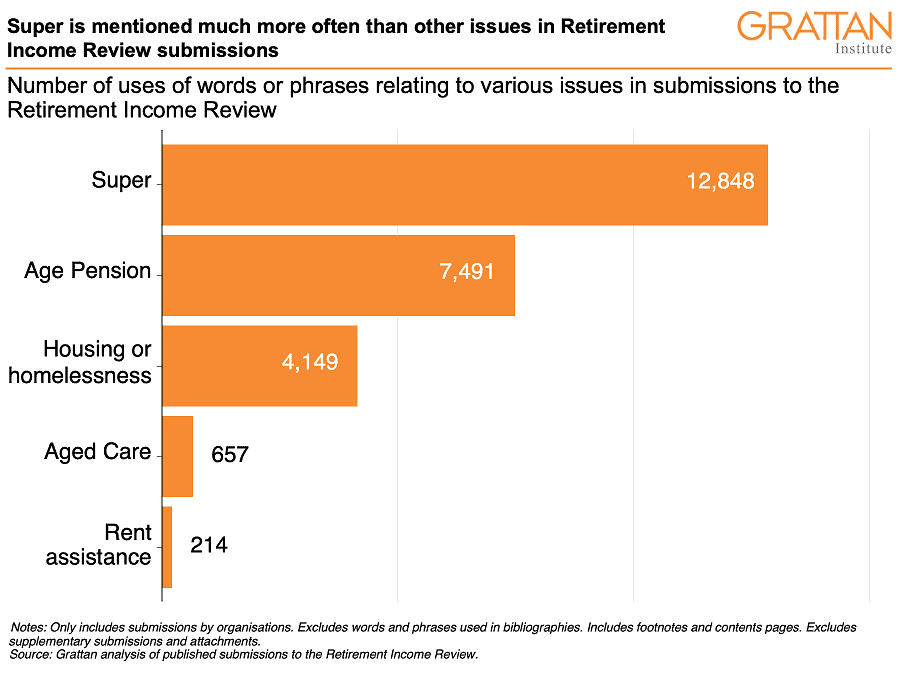 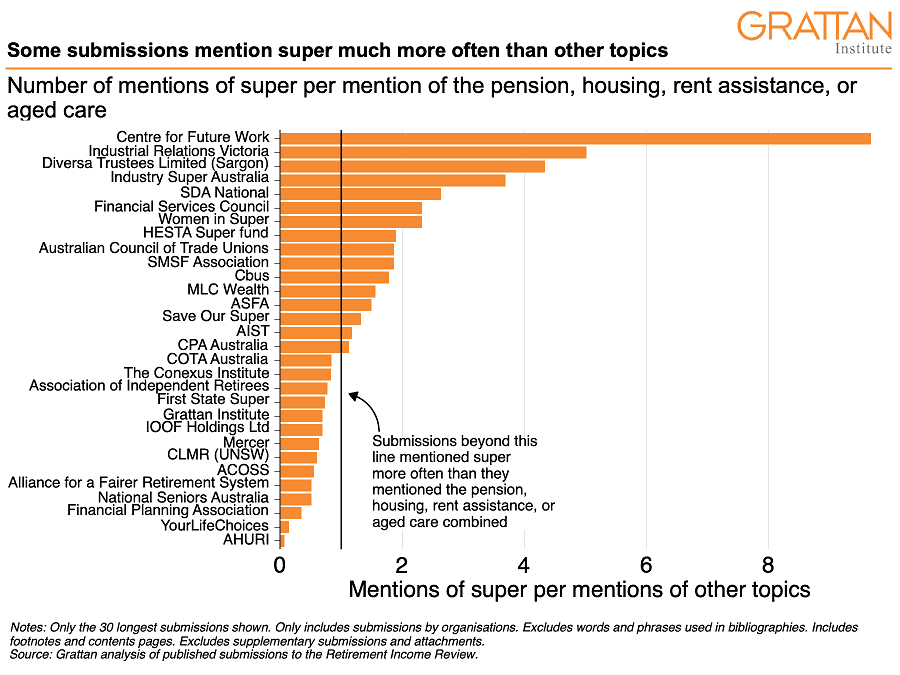 Of course, superannuation plays an important role in helping people save enough for retirement, but it is just one part of Australia’s retirement incomes system.

Retirees still draw more of their income from the age pension than from super. Most retirees own their homes, and that supports their living standards. And access to universal health and aged care services supports the living standards of all retirees. 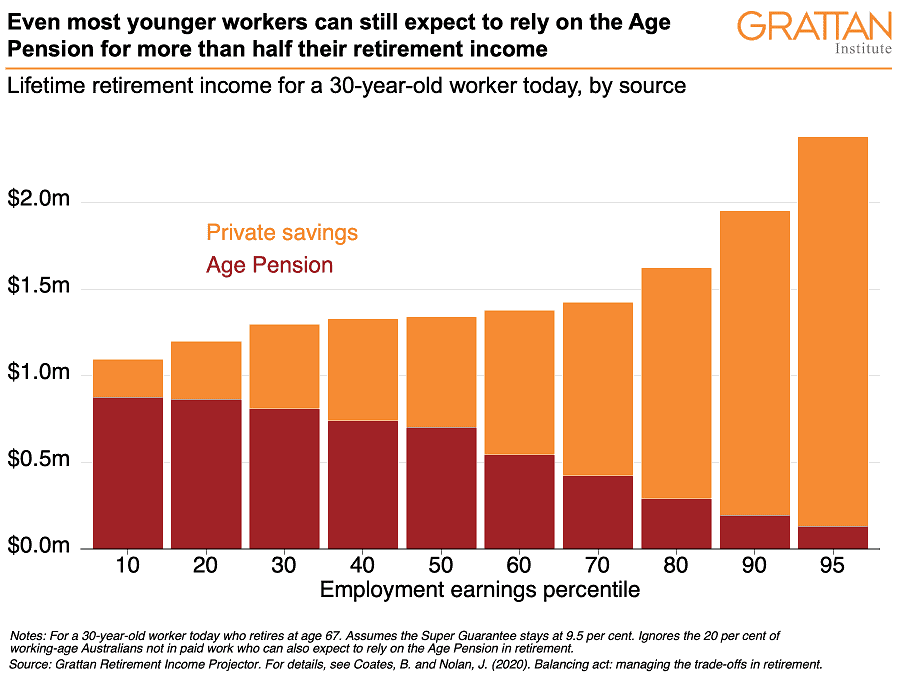 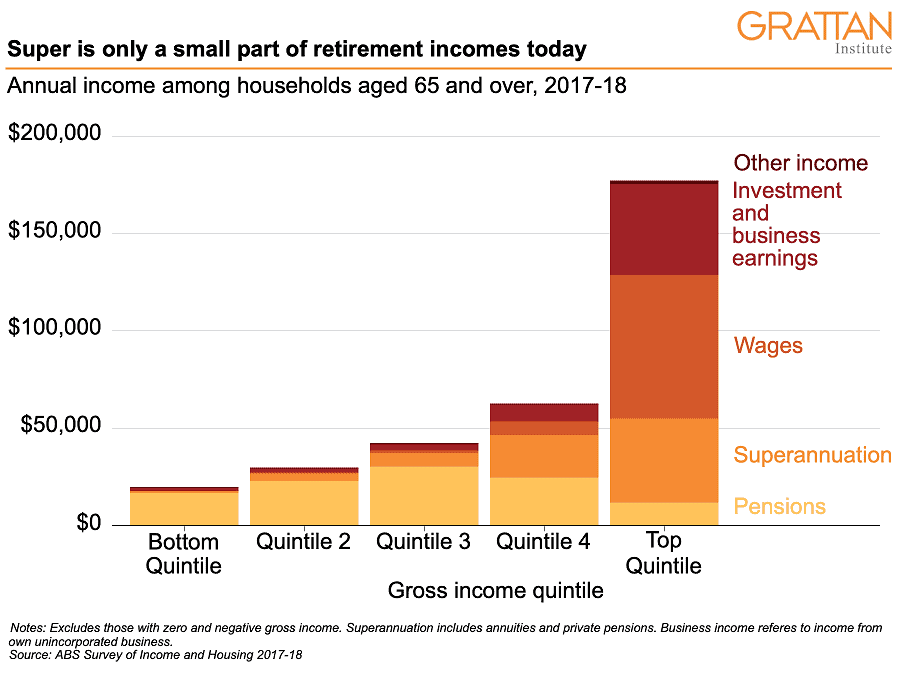 The age pension will remain much more than just a safety net only for the poorest Australians. In fact, most younger Australians today can expect to receive half or more of their income from the age pension when they retire in three decades’ time.

An unbalanced debate can lead to poor retirement incomes policy

Everyone agrees Australians should be able to expect an adequate retirement income. However, some in the super industry downplay the role that the age pension plays, and will continue to play, in supporting retirement incomes for middle-income earners. They argue that not only should middle income earners have a comfortable retirement income, but that that income should come predominantly from super – and their compulsory contributions during working life should be high enough to deliver that outcome.

Yet, as Grattan research has shown, raising compulsory super from 9.5% to 12% of wages, as already legislated, would force most Australians to save for a higher living standard in retirement than they have while working. It would cost the budget more in extra super tax breaks than it saves in reduced pension spending. And it would make pensioners today worse off since the pension is benchmarked to wages, which will grow more slowly should compulsory super contributions rise.

Rather than being a sign of super’s failure, the enduring importance of the age pension to the retirement incomes of middle-income Australians is a sign of a healthy retirement system. The means-tested age pension provides valuable public insurance against longevity, returns and several other risks for most retirees.

Together with the broader tax-transfer system, the pension redistributes income towards low and middle-income retirees, reducing income inequality in old age. And recent projections suggest age pension spending will decline as a share of GDP in coming decades.

An excessive focus on super has also distorted the ways in which we try to reduce poverty among retirees. Attempts to top-up the super balances of low-income earners are not the most effective way of reducing poverty in retirement.

Instead, the best tool to prevent people suffering poverty in retirement is the income support system, specifically the age pension (and Commonwealth Rent Assistance for retirees who rent).

The best predictor today of poverty in retirement is whether retirees own their own homes. And the problem will get worse because young Australians on lower incomes are less likely to own homes than in the past. That’s why raising Rent Assistance by 40% should be the number one priority to reduce poverty in retirement, and at the least cost, yet submissions to the review mentioned super 60 times for each one mention of Rent Assistance.

A good retirement income system depends on much more than just super.