Published at The Conversation, Monday 18 March

Dental care in Australia is a policy anomaly; for some reason, the mouth is treated very differently to other parts of the body. About 58% of dental costs are met directly from patients’ pockets, compared to 11% for medical primary care, and 12% for prescriptions.

As a result of these large out-of-pocket costs, two million Australians each year defer visits to a dentist or miss out on dental care. Poorer people are more likely to miss out. 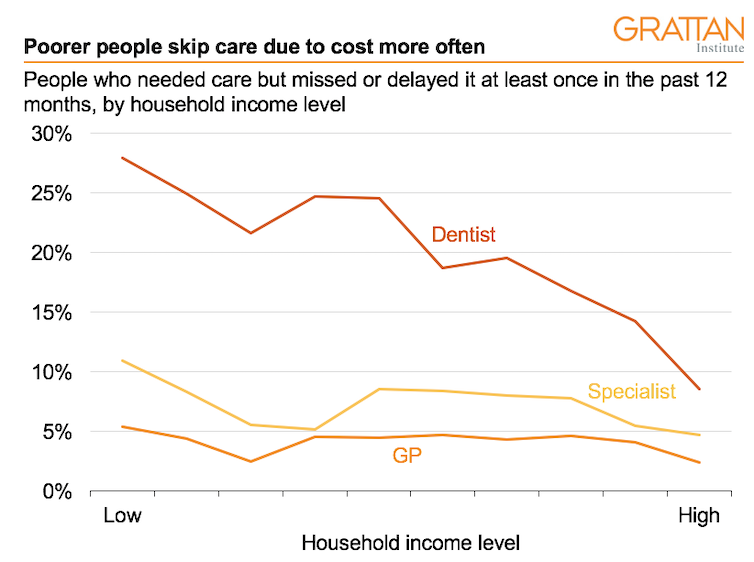 Every few years the Commonwealth government introduces a new dental scheme to fill the dental gap in our health system, and then a few years later the scheme is abolished with a change of government.

This start-stop nature of dental policy has to change. What’s required is a long-term vision to reunite the mouth with the rest of the body.

The architecture of a universal scheme

Medicare is widely embraced as the central pillar of Australia’s health system. There is no logical reason why this coverage should not be extended to oral health.

But we should learn from the Medicare experience. The expansion of dental access should be based on a new, better model. Here’s how this can be done.

1. Like Medicare, a universal dental scheme should be based on a mix of public and private services.

State public dental services are struggling valiantly to meet demand, with waiting times of more than a year in most states.

Investing money into these schemes – as the Commonwealth has done for the past few years – has made almost no dent in the waiting lists. And the risk remains that extra investment will be discontinued with changes of government, as has happened in the past.

Even if Commonwealth funding increased to adequate levels, it’s unlikely the state schemes could be expanded sufficiently to provide the amount of care needed.

Nor would a monolithic public-only scheme, with no choice of provider, be consistent with the way the rest of health care is provided.

A mixed public-private scheme could harness the existing investments by private dental practices, as has been done in the existing Commonwealth Child Dental Benefits Scheme.

2. A universal scheme should be ‘opt-in’: it should be based on dental practices agreeing to be part of the scheme.

Practices would be allowed to participate only if they agreed to certain conditions, most notably that they will bulk-bill all patients – thereby removing the financial barriers to dental care.

Participating practices would also be required to provide information on the results of their care, and to participate in approved programs to improve the quality of their care.

3. Quality care should be rewarded.

Although the universal scheme would initially make fee-for-service payments to participating practices, in a similar way to Medicare paying GP clinics when you visit a doctor, the payment system should become more sophisticated over time.

This could include rewarding dentists and practices that get the best results for their patients, by supplementing fee-for-service payments with performance-related payments based on following evidence-based practice and achieving better dental outcomes.

4. Not all aspects of oral health care should be covered under the universal scheme.

The priority should be to ensure the scheme funds primary dental care and treatments that are aimed at preventing problems and disease from developing. This includes check ups, treatment for tooth decay – which now may not involve drilling – and dentures.

5. The funding arrangements for the universal scheme should be designed to encourage reform and expansion of the dental workforce.

A universal dental scheme will require a bigger dental workforce. All oral health professionals should be encouraged to work to the top of their expertise and qualifications.

Under the new scheme, for example, oral health therapists would be able to perform many of the services now performed by dentists.

How much will it cost?

A universal dental scheme would cost about an extra A$5.6 billion a year. That sort of money could not be found overnight. Nor could the number of professionals required to staff such a scheme.

Instead, the federal government should announce that Australia will move to a universal dental scheme over the next decade – and it should produce a roadmap to get there.

The first step should be for the Commonwealth government to assume funding responsibility for oral health care for pensioners and health care card-holders – the group covered by existing state public dental schemes.

The Commonwealth funding should be on the basis of the mixed public-private model described above.

This initiative would cost an extra A$1 billion a year. That is a more affordable price tag – and sufficient dental professionals are already available to meet the anticipated extra demand.

Offsets against this extra funding could come from savings elsewhere in the health system. Previous Grattan Institute reports have identified opportunities in both hospitals and pharmaceuticals, or from the introduction of a tax on sugar-sweetened drinks, as recommended in another Grattan report.

An A$1 billion a year investment in expanding access to dental care for pensioners and health care card-holders would eliminate the waiting lists for existing public dental services, address a key inequity in health care, and set the stage for the big reform: a universal dental scheme for Australia.