by Marion Terrill and Hugh Batrouney

Australia should revamp how it selects major transport projects, so that governments can better know which new roads and railways are worth building and avoid squandering billions of dollars of public money on the wrong projects.

The ‘discount rate’ Australian governments have applied to assess the value of proposed projects has been stuck at 7 per cent since at least 1989, even though the price of money has fallen from about 8 per cent to 1 per cent since then.

The 7 per cent standard rate should be abandoned in favour of two lower rates: 3.5 per cent for low-risk transport projects (typically trains, buses and urban roads), and 5 per cent for slightly higher-risk investments (such as ferries and freight rail).

This new discount rate regime would cast fresh light on the value of some of Australia’s biggest transport projects. Under the present 7 per cent rate, the benefits of the $10 billion Melbourne Metro rail project and the Commonwealth Government’s $10 billion Inland Rail Freight project are both assessed to be only marginally higher than the costs, with Metro Rail ranked slightly better.

But under a lower discount rate, both projects would be assessed to deliver benefits about two-and-a-half times higher than the costs, and Inland Rail Freight could be ranked even higher.

Interest rates have fallen dramatically since the 1980s, and it makes no sense that discount rates in Australia have been stuck since then.

This report builds on two 2016 Grattan Institute reports that exposed the need for changes to the evaluation and selection of major projects in Australia. Cost overruns in transport projects found that governments spent $28 billion more on transport infrastructure between 2001 and 2015 than they told taxpayers they would. Roads to riches found that a big portion of the large sums governments allocated to transport projects between 2005 and 2015 was spent unwisely.

With Australian cities growing rapidly, smart investment in infrastructure is vital. Project evaluation must improve, so we build the right transport projects in the right order. Better discounting would be a big step in that direction. 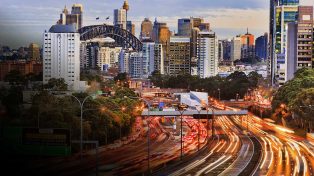