Published at The Conversation, Tuesday 5 May

In recent years the number of students in higher education has surged and so has the cost of the Higher Education Loan Program (HELP). HELP expenses will almost double in three years – from $2.3 billion this year to $4.4 billion in 2017-18, according to Education Department estimates. This is putting further pressure on the government’s budget.

The government’s higher education bill tried to address this issue. Under the bill, debtors would be required to start repayment when their wage reached A$50,638 in 2016-17, not A$56,264 under current laws. But the government has so far been unable to get the bill through the Senate.

Last weekend Education Minister Christopher Pyne announced a new plan to reduce the cost of HELP. The proposal will require HELP debtors who live overseas to begin to repay their stuent loans if they earn more than the repayment threshold. The government expects this measure to save A$140 million over the decade from mid-2017.

Under current rules, HELP debtors who live overseas are not specifically exempt from repaying. But because the Australian Tax Office (ATO) has no international jurisdiction, anyone not paying tax in Australia is not required to repay their HELP debt.

In principle, overseas HELP debtors should repay. The Wran report that recommended the introduction of the Higher Education Contribution Scheme (HECS) in 1988 argued that students should contribute to the cost of their education when they have the capacity to repay. HELP debtors living in Australia who earn more than around A$53,000 are required to repay, so why should equivalent debtors living overseas be exempt?

Like debtors living in England they repay under the income-contingent system. Each year, overseas debtors are required to submit significant paperwork to prove their income levels. A default repayment applies to debtors who do not submit evidence. Despite these efforts, more than two-thirds of English debtors do not repay.

Pyne wants to introduce a similar system. He is investigating a bilateral agreement with the UK in order to recover debts from Australians living there.

But, as the chart below shows, overseas debtors living in the UK and New Zealand (with which Australia already has an in-principle agreement for debt recovery) represent fewer than 30% of all overseas debtors.

Extending these agreements to other countries is likely to be difficult. We need a low-cost repayment system that can collect from debtors in many countries. 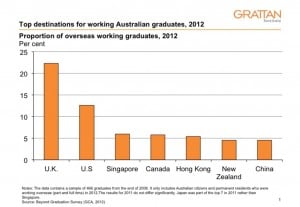 A more cost-effective way is to require overseas debtors to repay a flat amount each year. New Zealand provides a possible guide. It minimises administrative costs by charging overseas debtors flat amounts based on outstanding debt levels each year. The repayment amount ranges from A$1000 to A$4800 a year depending on the amount owed.

In Australia, the amount could simply equal the minimum annual repayment for people who reach the threshold – about A$2000. Flat amounts sacrifice income contingency but would make the repayment system less complex and cheaper to administer.

Charging flat amounts would require some people with low income to repay. Exemptions could be granted for full-time students in this category. The ATO could retain its discretion to delay repayment where it would cause financial hardship.

Collecting from overseas debtors, while desirable, would not solve HELP’s financial problems. Grattan Institute’s 2014 report, Doubtful Debt, argues that the biggest saving would come from ending the provision to write off HELP debt at death.

HELP is the only liability that is not recovered from people’s estates. Unpaid fines, taxes, bills and money owed to government agencies are all recovered. Since most people die of old age, the main beneficiaries of uncollected HELP debts at death are the debtors’ adult children. There is little justification for such an inheritance scheme.

Many debtors who earn below the threshold when they are alive are in high-income households. Most will die with estates larger than A$100,000. Grattan modelling shows that recovering HELP from deceased estates will more than halve the amount of debt that is not expected to be repaid (doubtful debt). That is a saving of more than A$500 million from this year’s lending.

Requiring overseas HELP debtors to repay would make HELP fairer, but do little for its financial viability. At present about A$10 billion – a quarter of the government’s total HELP lending – is classified as doubtful debt. It’s a heavy and growing burden.

Ending the debt write-off at death is the reform that is most needed to ensure our student loan scheme remains viable.