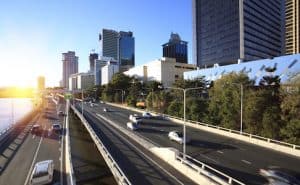 Published at The Conversation, Monday 27 November

The federal government announced a year ago that it would review the charges imposed on drivers for using our roads. That review hasn’t yet happened. They should get on with it, because reforming the way we charge road users will make our economy more productive and our cities more liveable. The longer we wait, the harder the path to those improvements becomes.

The problem with the present system is that there is only a weak link between what motorists pay and the costs they create when they use roads. The amount motorists pay for registration, for example, does not vary with the amount of time they spend on the road, let alone how long they’re stuck in traffic jams.

But before we get to the benefits of reforming how drivers pay for the costs of their road use, we need to debunk a big myth about road funding in Australia. It’s one that has become a major distraction in discussions about the need for change.

The myth of the fuel excise crisis

Vehicle technology is improving. Cars are becoming more fuel-efficient, and powering them with electricity is becoming more mainstream. At the same time, our commuting patterns are changing – over the past few years, the average distance Australians travel by car has fallen.

This is worrying the government, which collects fuel excise from us every time we fill the car with petrol. Urban Infrastructure Minister Paul Fletcher has specifically raised concerns that:

…the revenue from fuel excise and car registration is unlikely to keep pace with the amount we spend as a nation on operating, maintaining and investing in roads.

The government’s key economic advisory body, the Productivity Commission, recently suggested reform of the fuel excise levy was “becoming more urgent”. But talk of a funding crisis is overblown.

First, the minister knows that the government doesn’t, and can’t, segregate revenue from road use to spend on roads. Federal spending on infrastructure is funded from general government revenue, the pool of funds received from the full range of federal taxes. As far as the government is concerned, road funding is just one of many expense programs claiming a piece of the budget pie.

As for revenue from the fuel excise, the decision in 2014 to reintroduce indexation will deliver much-needed relief for the government. The truth is, revenue did not fall much over the past decade and the levy now increases each year in line with inflation. The government may cry poor, but it can’t cry broke.

So, do we still need that long-promised review?

Fuel excise revenue is not the problem the government would have you think it is. But its promised review remains important because reforming road-user charges would bring big benefits for Australia.

The disconnect between what motorists pay and the costs of their road use matters because traffic congestion is the main cost that cars create when they use existing roads. The regular wear and tear of our roads is overwhelmingly caused by trucks and other heavy vehicles; cars do negligible damage to paved roads.

As we describe in our report Stuck in traffic? Road congestion in Sydney and Melbourne, such a mechanism would mean charging people who drive at peak times on congested roads a small fee.

People who pay the charge would get a quicker and more reliable trip, because there would be fewer cars on the road at peak times. People who can travel outside of the peaks would not have to pay, because there would be no congestion charge when the roads are not congested. Because traffic flows would be spread more evenly across all hours of the day, our economy would become more efficient and our cities more liveable.

Critics of these decongestion schemes argue that charging motorists in this way is unfair. Why should low-income earners or those living on the fringes of our major cities, they argue, be hit with a new charge for something they can’t avoid when they go to work?

It’s a valid concern, but our report suggests it is entirely feasible to redesign motor vehicle charges in ways that actually make them fairer.

A key element of fairness is that any new congestion charge should be offset by reducing or removing vehicle registration charges. The goal should be to change how we pay for roads, not how much we pay. Developing such options is precisely what the long-promised review should do.

This reform would allow us to get the greatest value from the road network we already have, before we ask taxpayers and motorists to pay for constructing big and expensive new roads.

Time to get the show on the road

If we don’t make changes, congestion and delays on the roads in our biggest cities will only get worse. The government should provide terms of reference for the review before Christmas. These terms should acknowledge the importance of developing options for charging motorists for the congestion they cause.

In doing so, it will be important to resolve how the range of state-levied taxes on motorists, including existing and prospective toll roads, might fit within new charging arrangements. Only then should the review turn to the question of how many expensive new roads the states should be building.