Published at The Conversation, Wednesday 29 January 2014

Social services minister Kevin Andrews says a concern that the system is unsustainable is driving his review of welfare.

It’s true that Australia has a budget sustainability problem. It’s not true that welfare is the cause of it – at least, not the types of welfare that are the focus of the review. The review will exclude the Age Pension, despite it costing more than double the Disability Support Pension and the number of recipients growing faster.

One thing that’s often missing in debates about the budget is a good understanding of the scale of the problem. The Commonwealth budget is about A$375 billion a year. About 30% of that, or $111 billion, is spent via the welfare system – the single biggest expenditure category, as shown in the chart below. 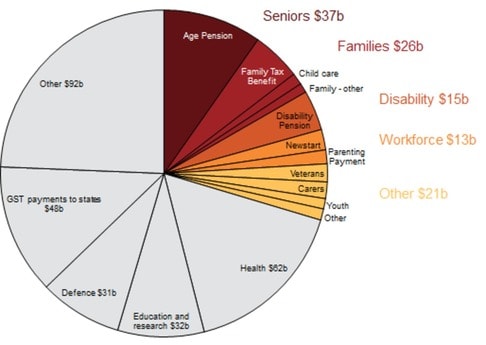 The Commonwealth’s forecast fiscal budget deficit for this year is over $40 billion. The Grattan Institute’s report Budget Pressures on Australian Governments showed that the collective budget deficit for Commonwealth and state governments could be as large as $60 billion within a decade. We certainly need to do something about it, but disability pensions and the Newstart Allowance are not the main cause of the problem nor the source of substantial solutions.

While welfare spending has grown over the past ten years, it’s grown much less than other big areas of expenditure, particularly health. Welfare spending has actually shrunk compared to the economy as a whole. If it had stayed constant as a share of GDP, we’d be paying around $10 billion more than we are now. The really big spending growth has been in health, which has grown much faster than GDP.

Even within the welfare budget, the focus areas of the review – disability and workforce payments – are not the main game. The Age Pension costs about $36 billion a year, or one-third of the welfare budget and almost 10% of the entire Commonwealth budget. Payments to families (such as Family Tax Benefit, paid parental leave and childcare support) cost another $26 billion.

In comparison, the Disability Support Pension costs $15 billion, Newstart costs $8 billion and Parenting Payments cost $5 billion. Even big cuts to these last three programs will yield only limited savings compared to the size of the budget hole we face.

The Age Pension is also by far the biggest source of growth in welfare spending. As the chart below shows, spending has grown by almost $13 billion in the past ten years. Only about $5 billion of this is due to the ageing population. The rest of the spending growth is because of generous indexation and changes to payment rates and eligibility by successive governments. 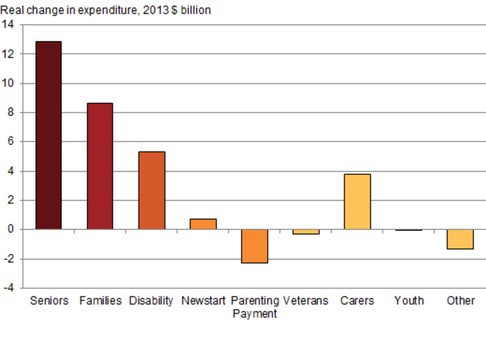 While disability payments also grew over the past decade, changes to eligibility by the Gillard government dramatically slowed the growth rate. It’s questionable whether it could be reduced much further at this stage, especially since there’s little evidence that tightening benefits is a good lever to get people into work or that suitable jobs are available for them.

Similarly, family benefits have recently been tightened, which leaves less scope for cuts to high and middle-income earners than used to be the case – with the notable exception of the government’s proposed Paid Parental Leave scheme.

In contrast, workforce payments, such as Newstart, Youth Allowance and Parenting Payment, shrank compared to the economy as a whole in the past ten years. Some shrank in real terms. There’s little scope for further cuts here: Newstart payments are already so low that many commentators, including the Business Council of Australia, think they need to be increased because current levels create barriers to people finding work.

The welfare payment with by far the biggest scope to make savings without incurring huge collateral damage is the Age Pension. Not only is it the biggest payment, and one of the fastest growing, it’s also the worst targeted to needs.

As we showed in Grattan Institute’s Balancing budgets: tough choices we need, around half of Age Pension spending goes to households with more than $500,000 in net assets. And as the chart below shows, about four in five mature-age households with around $1 million in assets get some welfare payment, of an average of $200 a week. 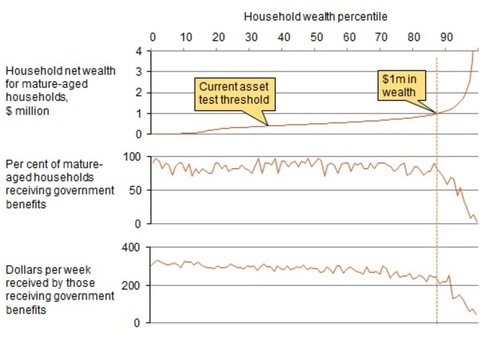 Chart 3: Household assets and Age Pension eligibility Note: ‘Mature-age households’ are households in which the household reference person, generally the ‘head’ of the household, is of Age Pension age (65 or over). Source: Grattan Institute, Balancing budgets

If government wants to fix the budget via the welfare system, it should start by raising the Age Pension age and including owner-occupied housing in the pension assets test.

Raising the pension and superannuation eligibility ages to 70 would yield $12 billion a year for the budget, mostly in the form of increased income tax revenue, while producing a lift in economic activity of up to 2% of GDP. Given increasing life expectancy, it’s not unreasonable that those who are able to should work a little longer, as younger cohorts will inevitably do.

Including owner-occupied housing in the Age Pension assets test would save government about $7 billion a year. It would have little impact on the poorest pensioners, who do not have enough wealth to put them over the threshold anyway. The impact on low-income, high-wealth retirees could be mitigated by allowing them to claim the pension while accumulating a debt against their property that would be paid back when the house was sold.

There are a number of other choices for repairing the budget hole Australia faces, as we set out in Balancing Budgets. But it’s clear very little money can be saved by reducing support for some of the most vulnerable people in Australia. Andrews should look elsewhere if he is serious about budget sustainability.