Is Labor’s childcare policy welfare for the well-off? - Grattan Institute

Lots of families are celebrating federal Labor’s plan to make childcare cheaper. But some commentators are concerned that the policy delivers big benefits to the well-off – questioning whether ‘cost of living relief’ is appropriate for these families.

But it’s wrong to think of Labor’s policy – to increase the maximum Child Care Subsidy from 85 per cent to 90 per cent, slow down the rate at which the subsidy tapers off, and remove the annual cap – as middle class welfare.

As veteran commentator John Durie points out: “When a politician spends billions on building roads everyone nods and ticks the box but if that same money is spent on childcare subsidies, some question its merit and call it middle class welfare.”

Early education and care has benefits for children. But it is also a cost associated with working. Parents need childcare in order to be able to work.

Normally, costs associated with doing your job count as tax deductions. But the system is not set up this way for childcare (for good reasons, see this post). Instead we have a Child Care Subsidy, which provides a high subsidy for low-income earners (currently an 85 per cent subsidy for families with combined income of $69,000 or less). The subsidy then reduces quite steeply for every extra dollar earnt.

This steep taper is the source of a lot of ‘workforce disincentives’ – as is the annual cap on the total amount families can claim. Labor’s policy is an economic reform because it flattens the taper rate and removes the annual cap, encouraging parents to work more and earn more. Under the current system, the incentive to work is weak or non-existent for single parents and ‘second earners’ in a couple (usually women), particularly if they want to work more than three days a week.

We estimate that Labor’s plan would increase hours worked by second earners by 11 per cent, and this higher participation would boost GDP by more than double the additional cost. 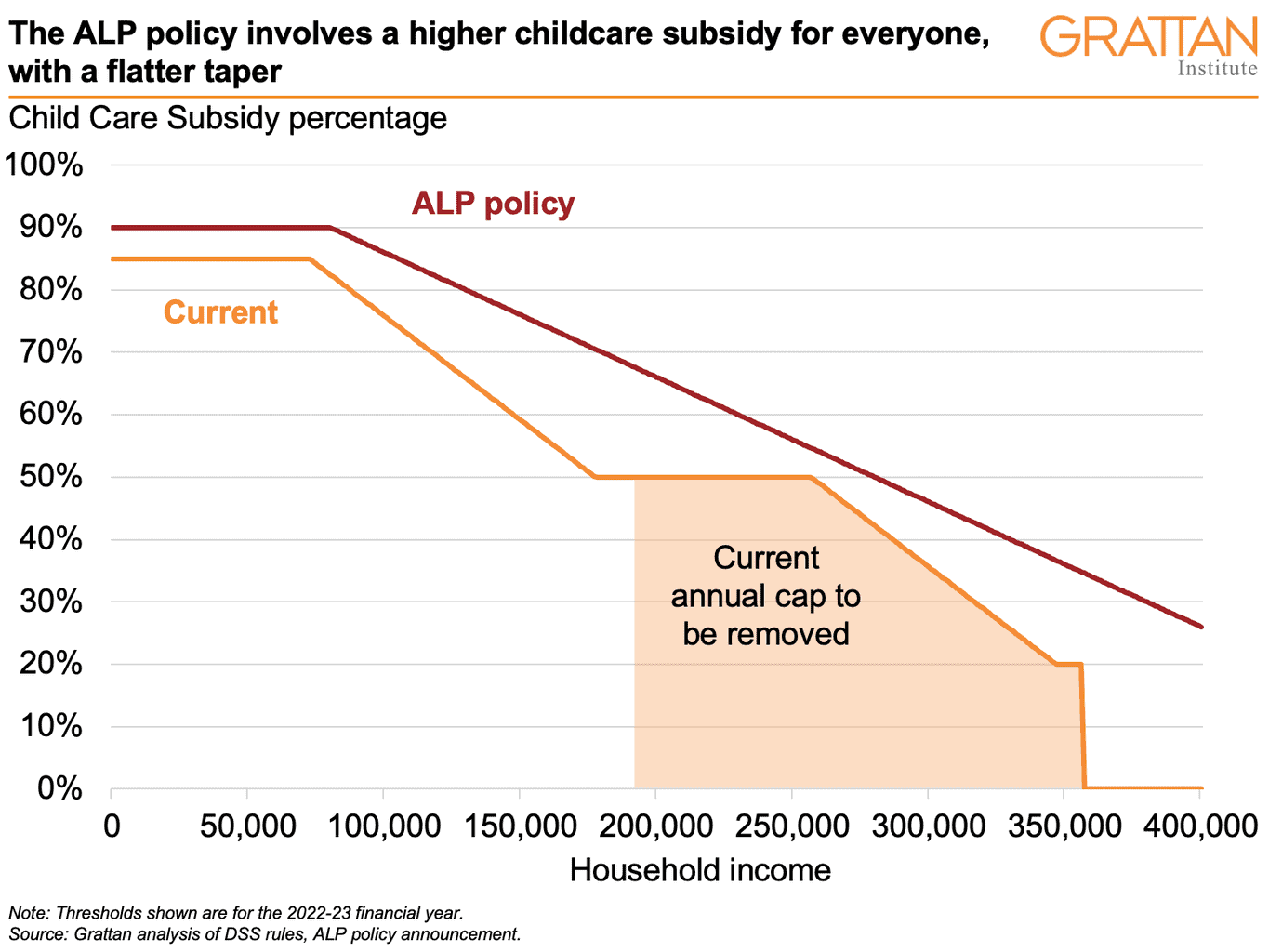 Table 1 compares the benefits for three example families under the current system compared to under Labor’s policy.

Notes: WDR = Workforce disincentive rate, which is the proportion of every extra dollar earned by the second earner that is lost to tax, net childcare costs, and benefit clawback. Subsidies shown are for the 2022-23 financial year.

You can’t fix the workforce disincentives without generating additional benefits for higher-income families. If you are outraged that the top marginal tax rate is 45 per cent, then you should be doubly outraged by the workforce disincentives facing single parents and second earners – of at least 80 per cent and sometimes more than 100 per cent (yes, that means they are paying for the privilege of working).

Some commentators have highlighted the benefits for rich families earning more than $350,000. A family earning $360,000 is at present not eligible for any childcare subsidy. This is because the current system has a ‘cliff’ at $354,000, which creates a very strong disincentive to work for families close to the cliff. Under Labor’s plan that family would be eligible for a 34 per cent subsidy, because the taper continues to do its work, meaning that the subsidy continues to reduce as family income increases. 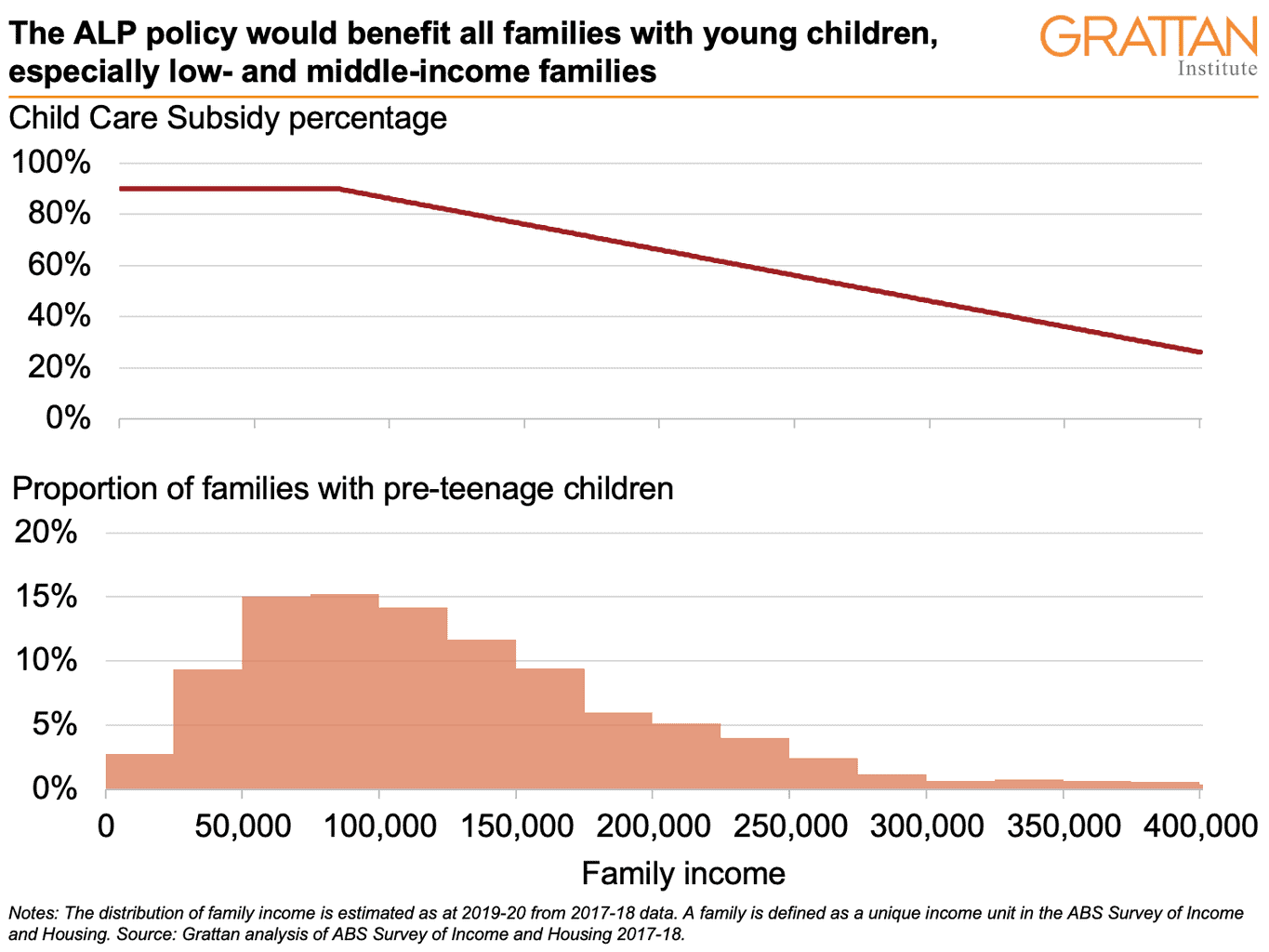 Labor’s plan boosts the subsidy and removes the annual cap. But there has been some confusion about what ‘removing the cap’ means, because there are two caps in the current system. One journalist has observed that: “Wealthy parents in exclusive suburbs can pay $200 a day or more at private centres offering yoga and organic meals… Why should taxpayers subsidise 90 per cent of the cost of boutique childcare in Sydney’s eastern suburbs?”

Labor plans to remove the annual cap (which limits how much families can claim in total), not the hourly rate cap (which provides a benchmark price for childcare providers to discourage them from charging above that rate).

This is a critical distinction because the hourly rate cap – introduced by the Coalition Government as part of its 2018 childcare reforms – plays an important role in containing fee rises. It represents the maximum amount the government will subsidise for each hour of care. This provides ‘a guide to providers and families about what a high fee might be’ and discourages providers from charging above that fee.

‘Boutique’ childcare centres still exist, but they are far from the norm. Only about 12 per cent of providers charge fees above the hourly rate cap, and parents who choose to use those services pay much higher out-of-pocket costs.

Even under a 90 per cent universal childcare scheme – which Labor says it plans to investigate – the hourly rate cap would be very likely to stay.

Labor’s plan to make childcare more affordable is an important economic reform for these times. It builds constructively on the Coalition’s 2018 reforms to improve women’s workforce participation. With bipartisan support it could support the economic recovery too.