School funding – where the money went

School funding has increased substantially over the past decade or so. But student numbers and teacher wages also grew. Teacher wages make up about 80 per cent of the costs of running a school, so schools only get an increase in their effective level of resources if per student funding goes up faster than wages.

Once wages are taken into account, nearly all the effective increase in recurrent funding from 2007-08 to 2016-17 went to non-government schools, as reported in today’s Sydney Morning Herald and Age. 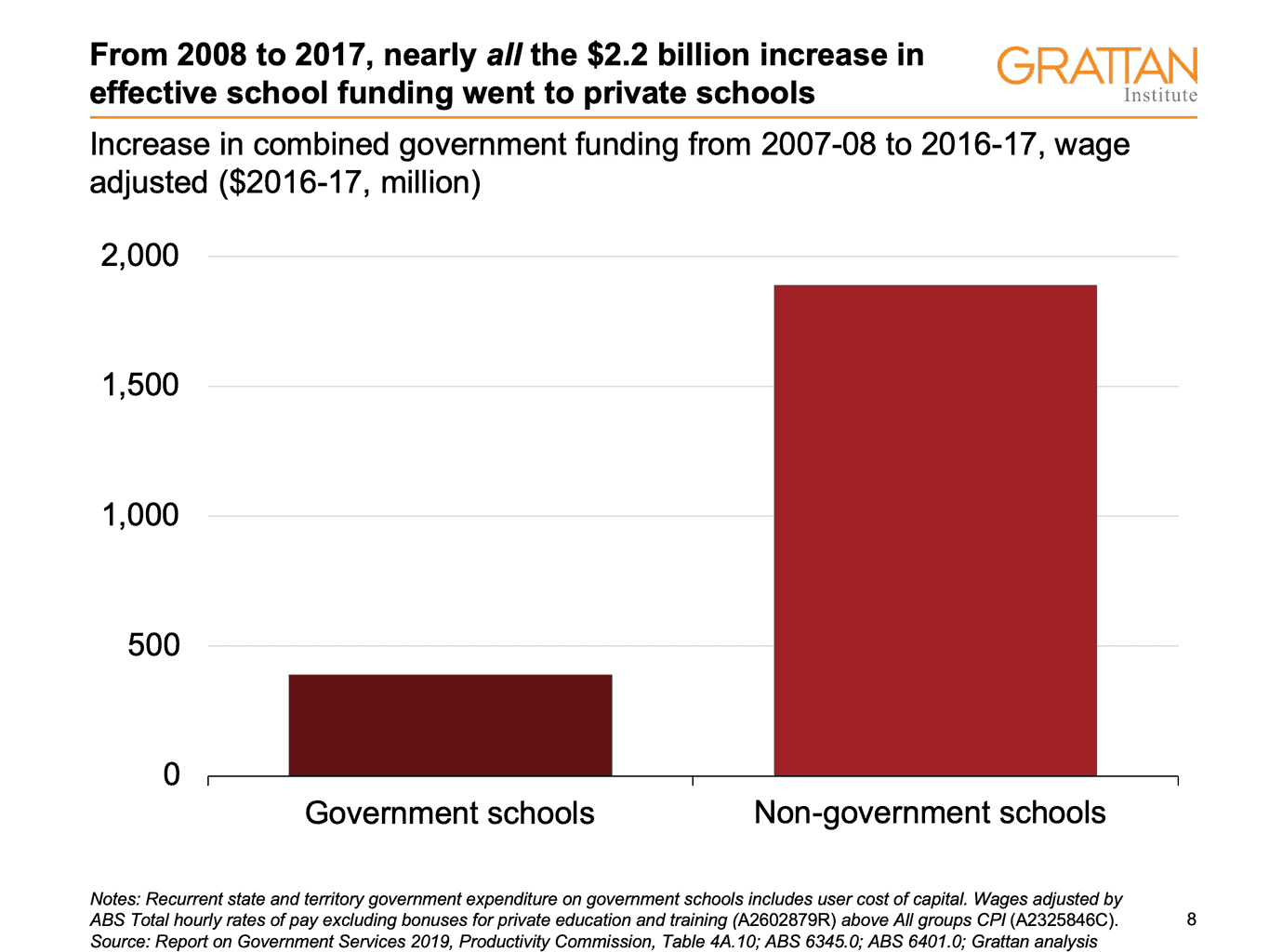 Despite increased Commonwealth investment, public schools had minimal growth in effective funding. This occured because the funding they got from the states and territories grew slower than wages.

This post explains my analysis of where the money went. The underlying data for this analysis is taken from the Productivity Commission’s Report on Government Services 2019 (ROGS 2019). ROGS has some key limitations – for example, funding is reported on a financial-year basis while schools are funded on a calendar-year basis, and Catholic and independent school funding are aggregated – but it is the most definitive source of school funding data.

Governments like to talk about nominal funding increases, the raw dollars that go to schools. Given that Australia’s school enrolments are growing, and inflation is higher than zero, this number will always go up – which is why governments can always claim future funding will be at ‘record levels’. 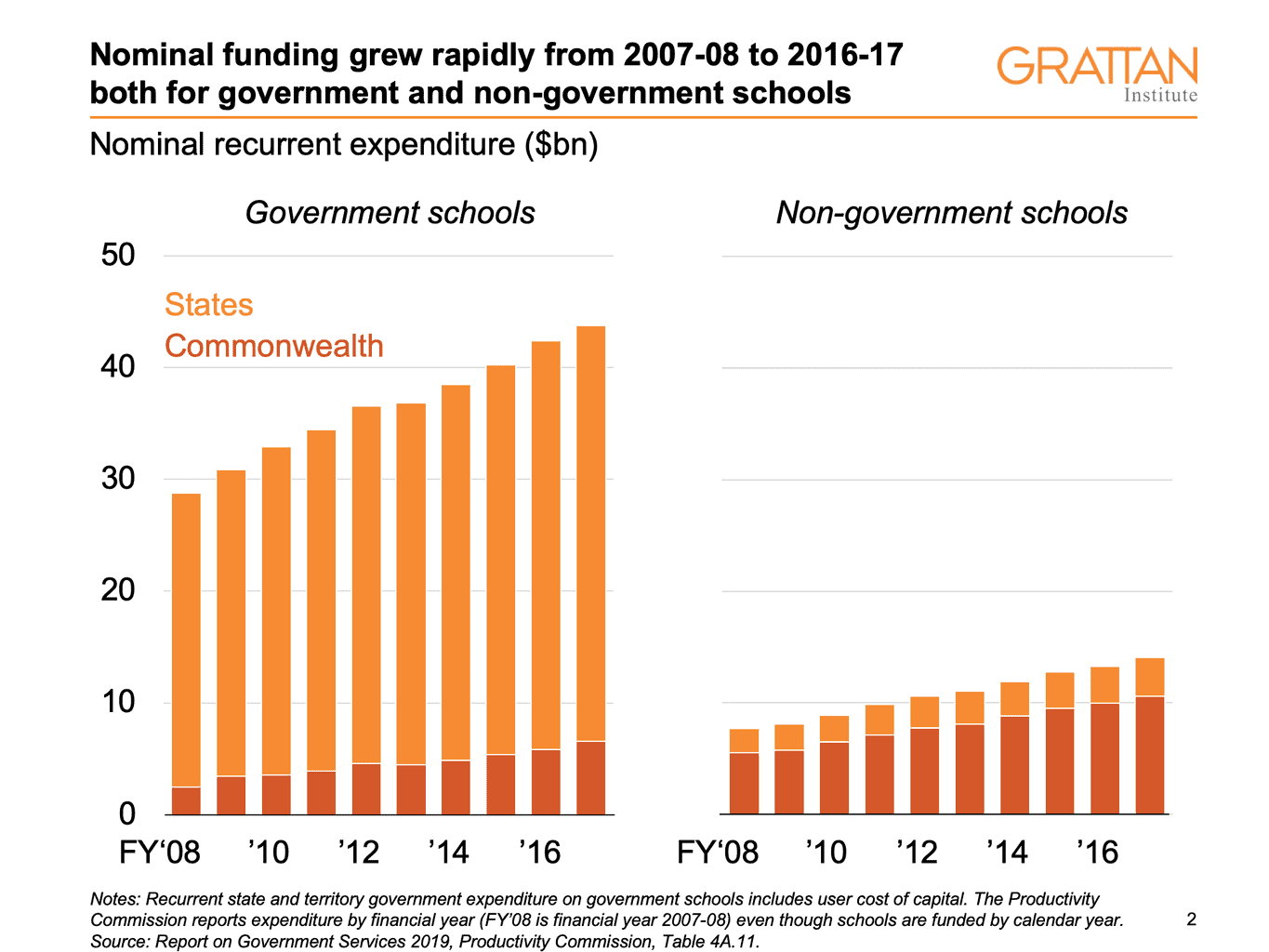 Costs increase every year, so a better analysis is to look at real funding, i.e. expenditure deflated by the consumer price index. From ROGS 2019 Table 4A.10: 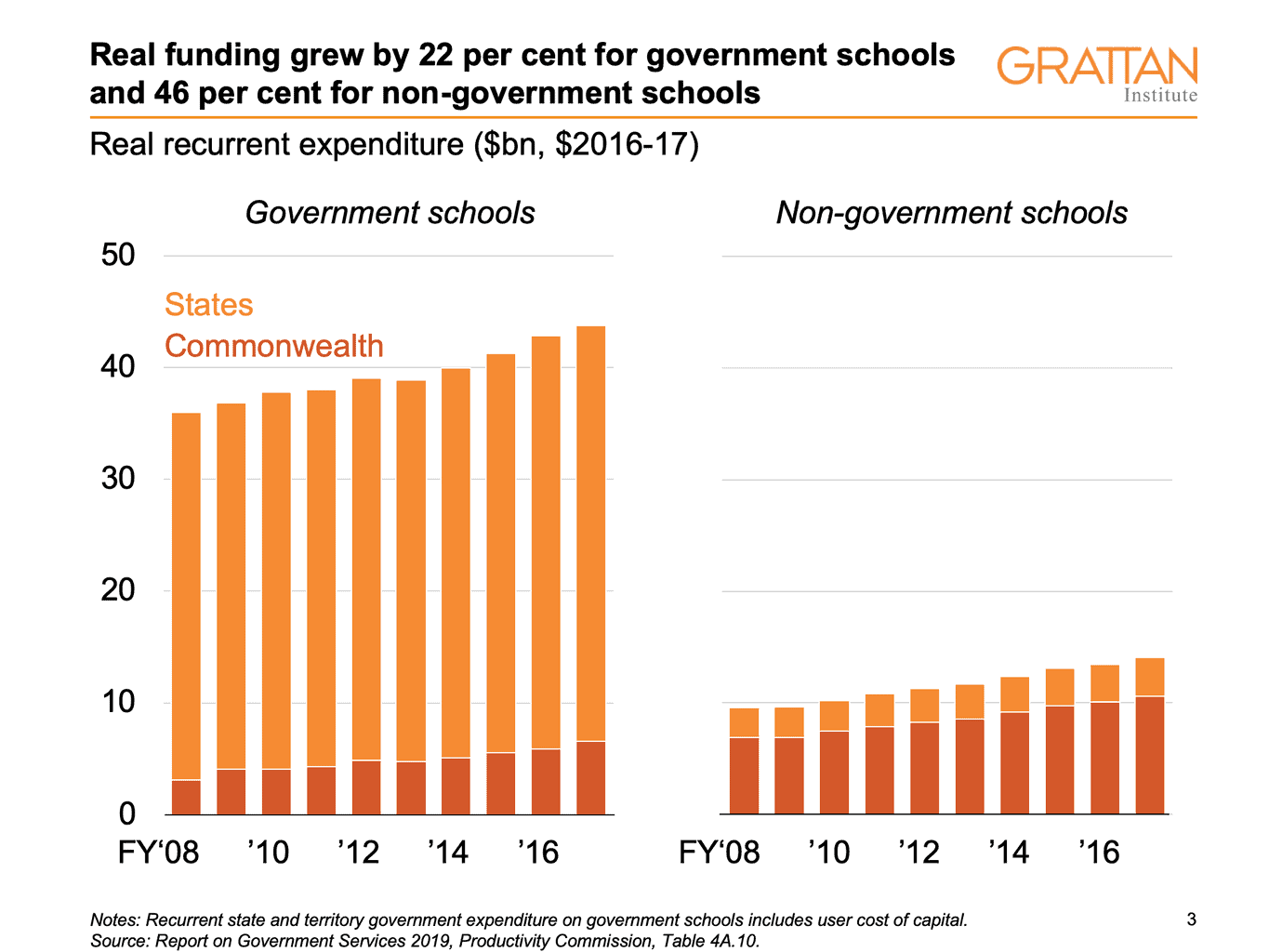 Australia’s school-aged population is growing, a key reason funding keeps going up. ROGS 2019 Table 4A.3 shows there were 11 per cent more government school students in 2017 than 2008, and 13 per cent more non-government students. 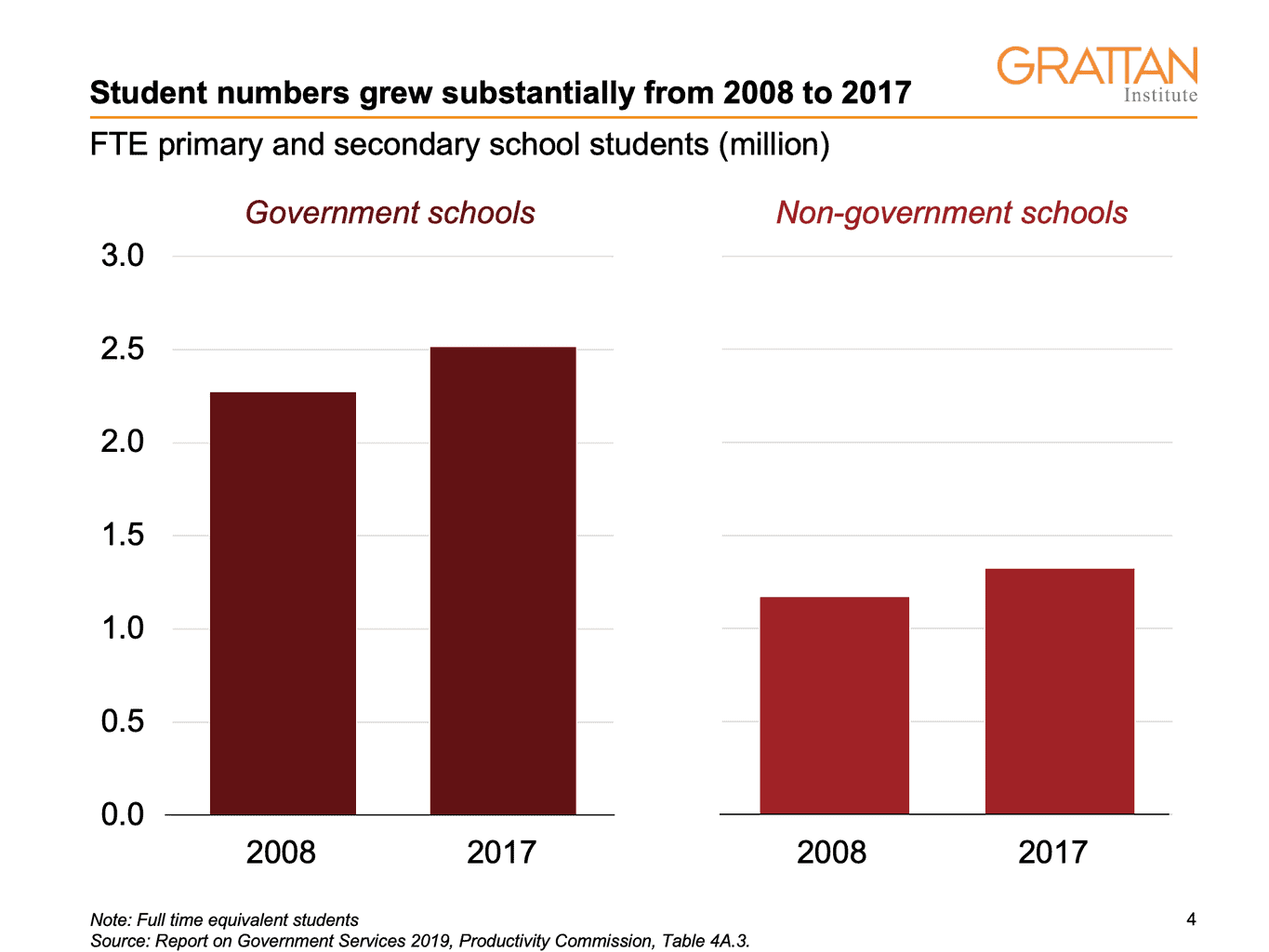 On a per-student basis, funding increases look much more modest 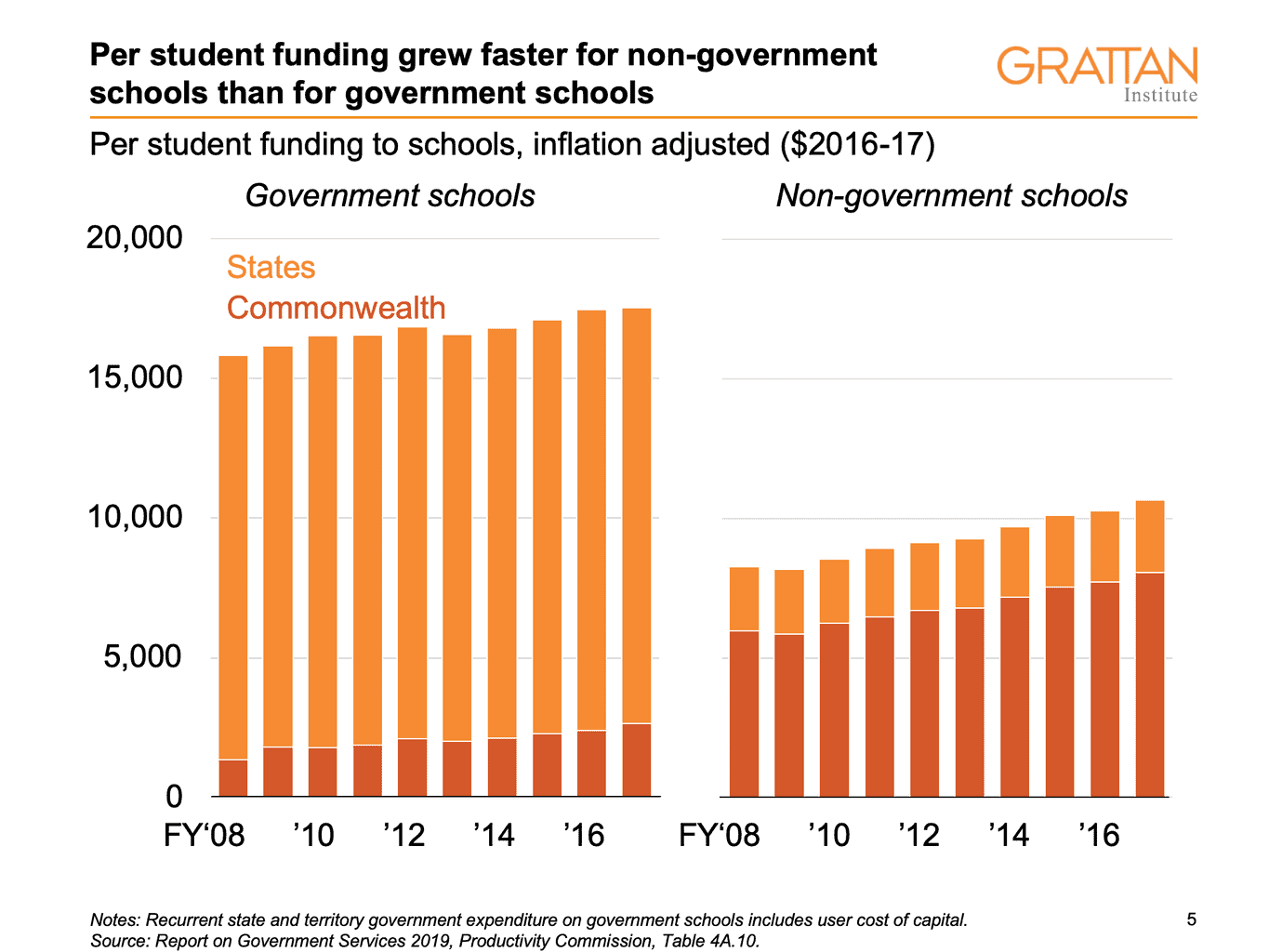 Sharp-eyed readers may note that these figures for government schools include user cost-of-capital (UCC). There is a reasonable argument that UCC should be excluded from analysis like this, but in this case it doesn’t make much difference. In fact, the disparity in funding growth rates between government and non-government school funding is even greater if UCC is excluded, so leaving it in presents a conservative comparison.

About 80 per cent of school operating costs are wages. Some of the remaining costs are also linked to wages. And as we showed in the Technical supplement to Grattan’s 2018 report Circuit Breaker, wages for educators grow about 1 per cent faster than CPI – in line with broad wages growth in the economy.

What this means in practice is that if a school gets a real funding increase of 10 per cent over a decade, that will all be eaten up by increased wages. The school won’t be able to hire any more staff, or buy any more resources.

Unfortunately the Productivity Commission doesn’t publish wage-adjusted funding for schools. But it can be easily calculated using the Wage Price Index for Education (ABS 6345.0 Series A2602879R) and all goods CPI (ABS 6401.0 Series A2325846C).

The effective per student funding increases start to look much more modest: 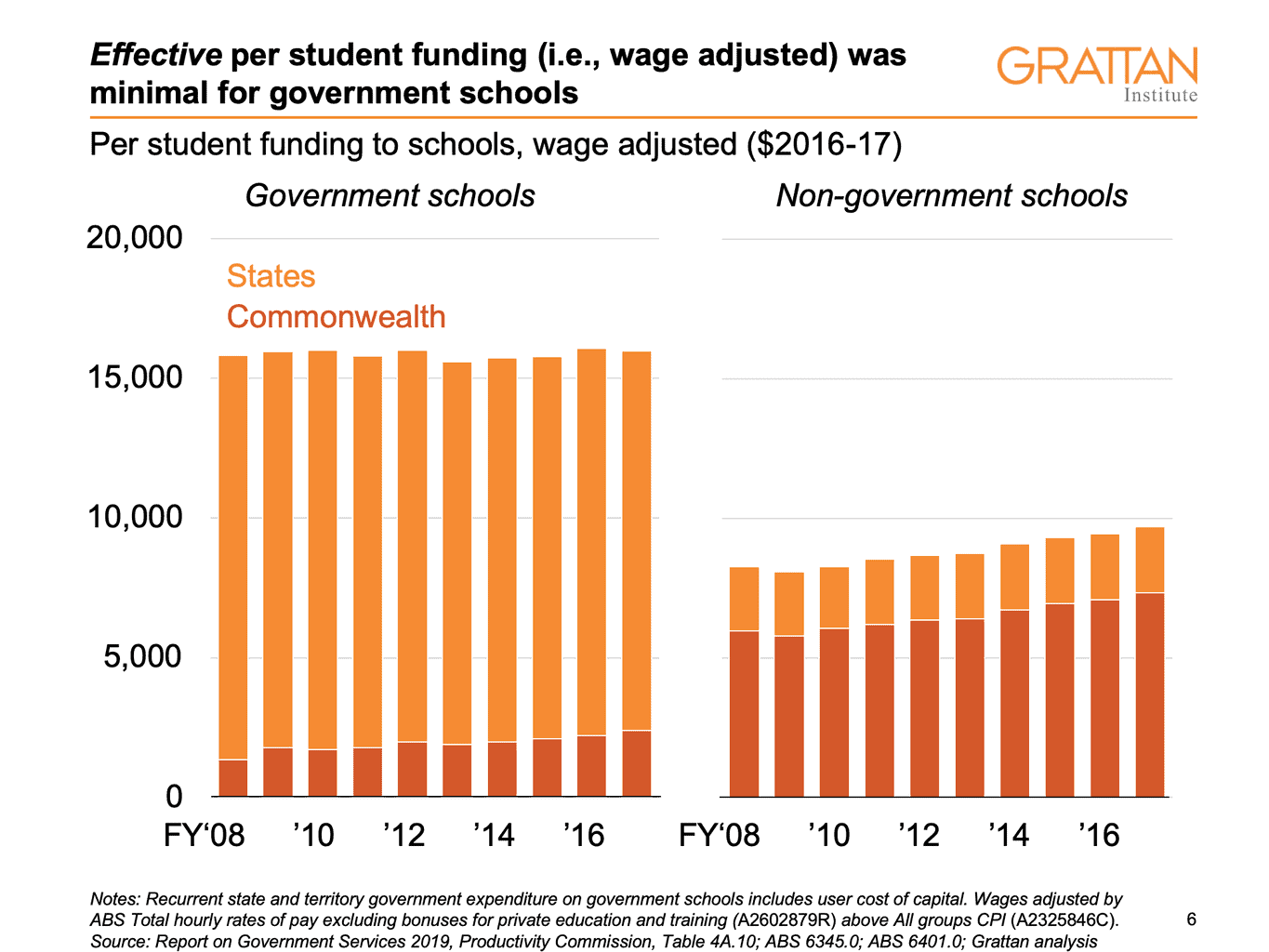 The best way to see this is by reference to the starting year of 2007-08, shown in the following chart. 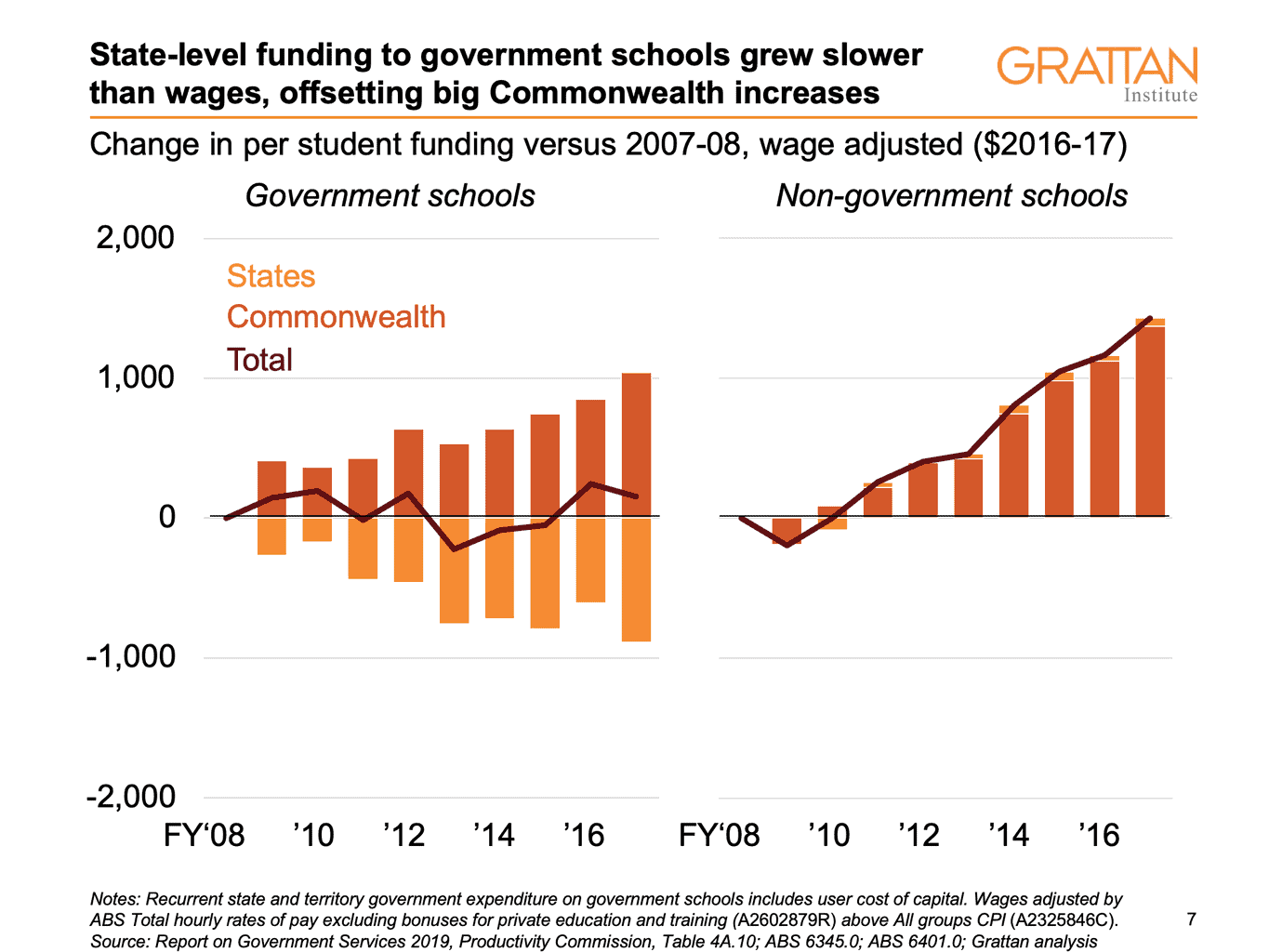 Most of the extra $2.2 billion a year went to non-government schools

In total, Commonwealth and state governments increased effective schools funding by about $2.2 billion a year from 2007-08 to 2016-17.

Just 17 per cent of this money went to government schools – despite the fact that they educate about 65 per cent of all students and more than 80 per cent of the most disadvantaged students (measured using the MySchool student SES score).

The pattern varies by state

The pattern of effective funding changes varies by state and territory. In part, this is a response to where they started; for example, Western Australia had historically funded its government schools more generously than other states, which may partially explain its big funding drops over the past decade. Meanwhile, the NSW state government was more generous in its funding to government schools than other states; but its funding still fell short of wages growth. 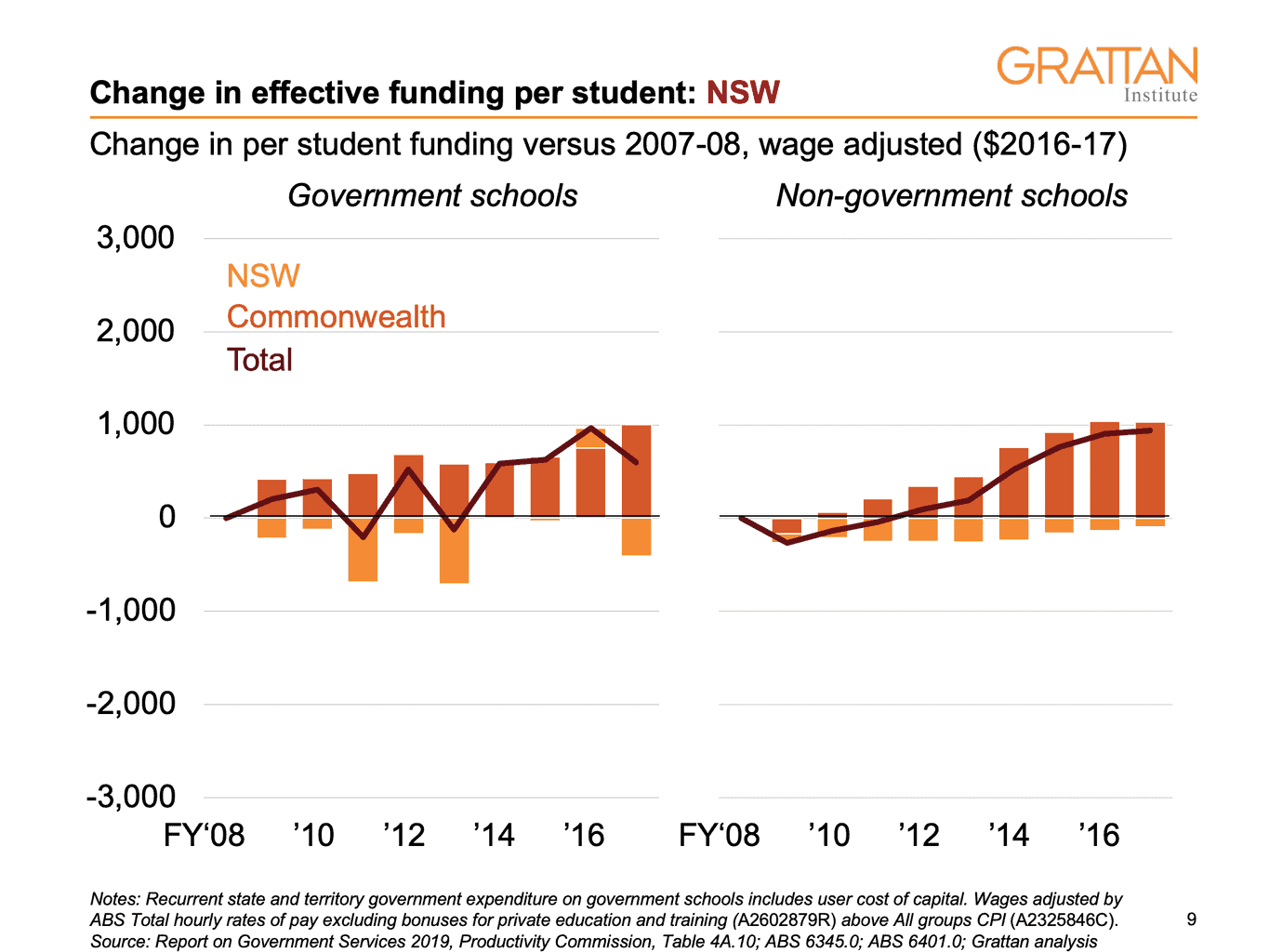 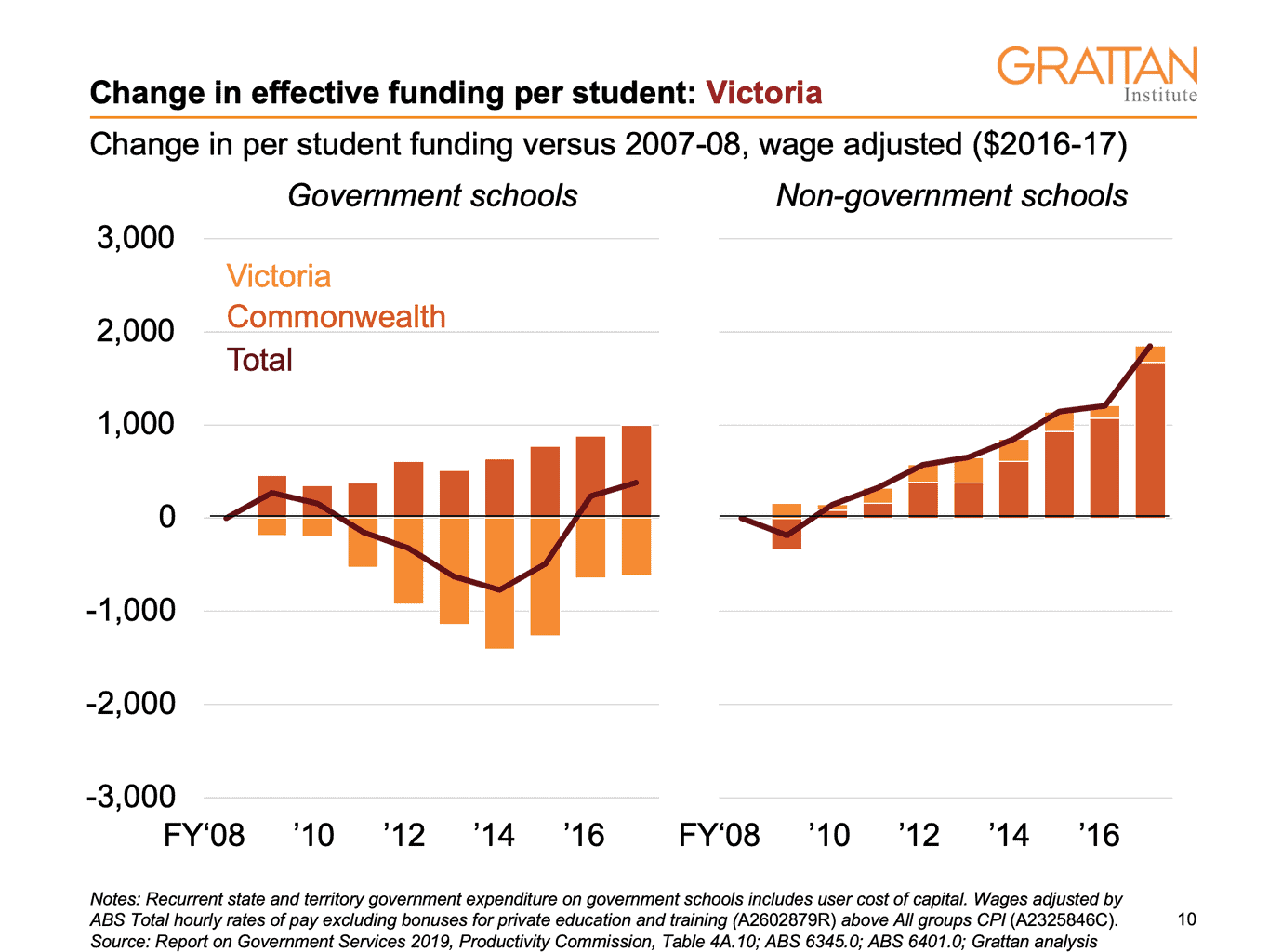 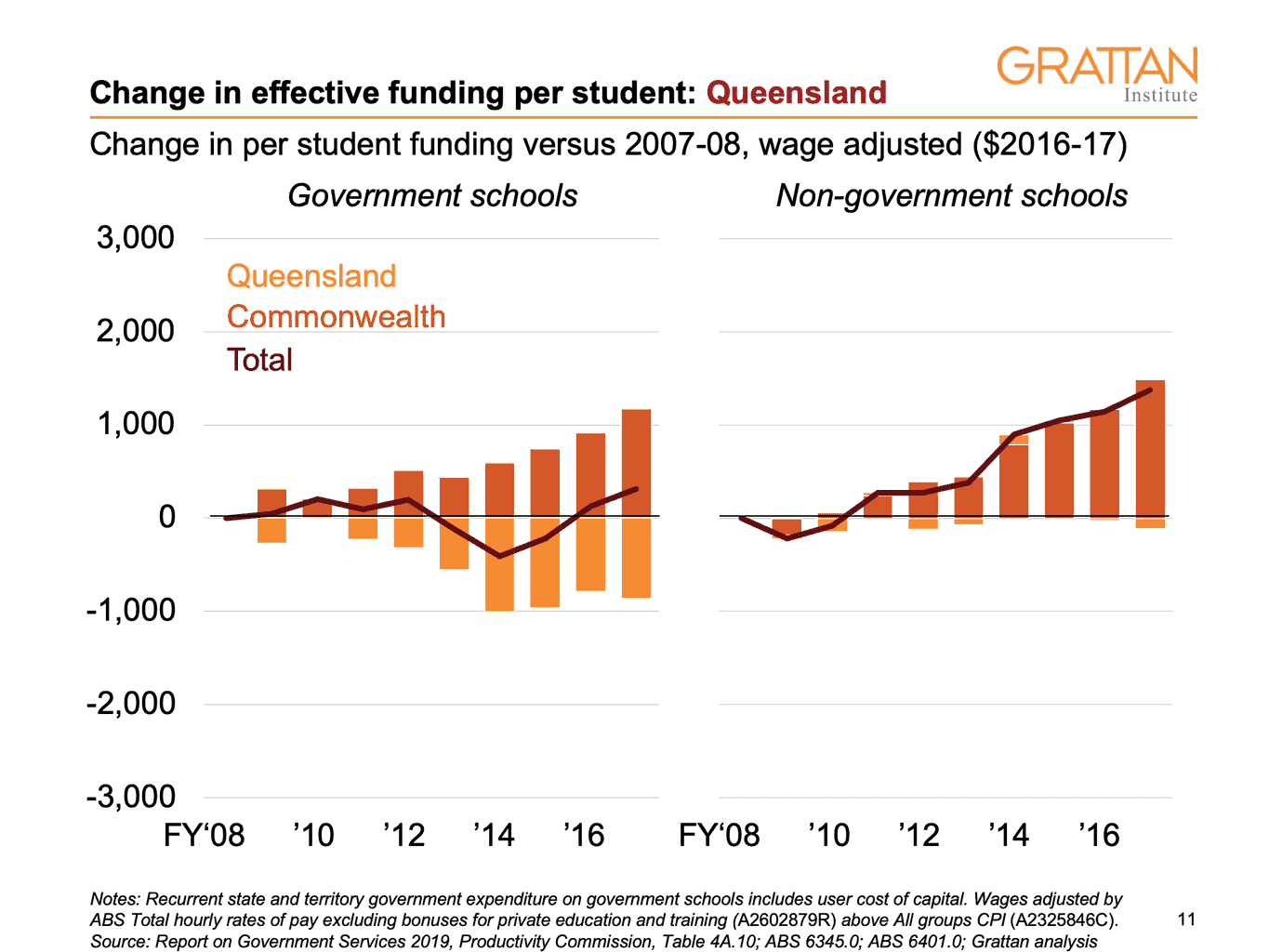 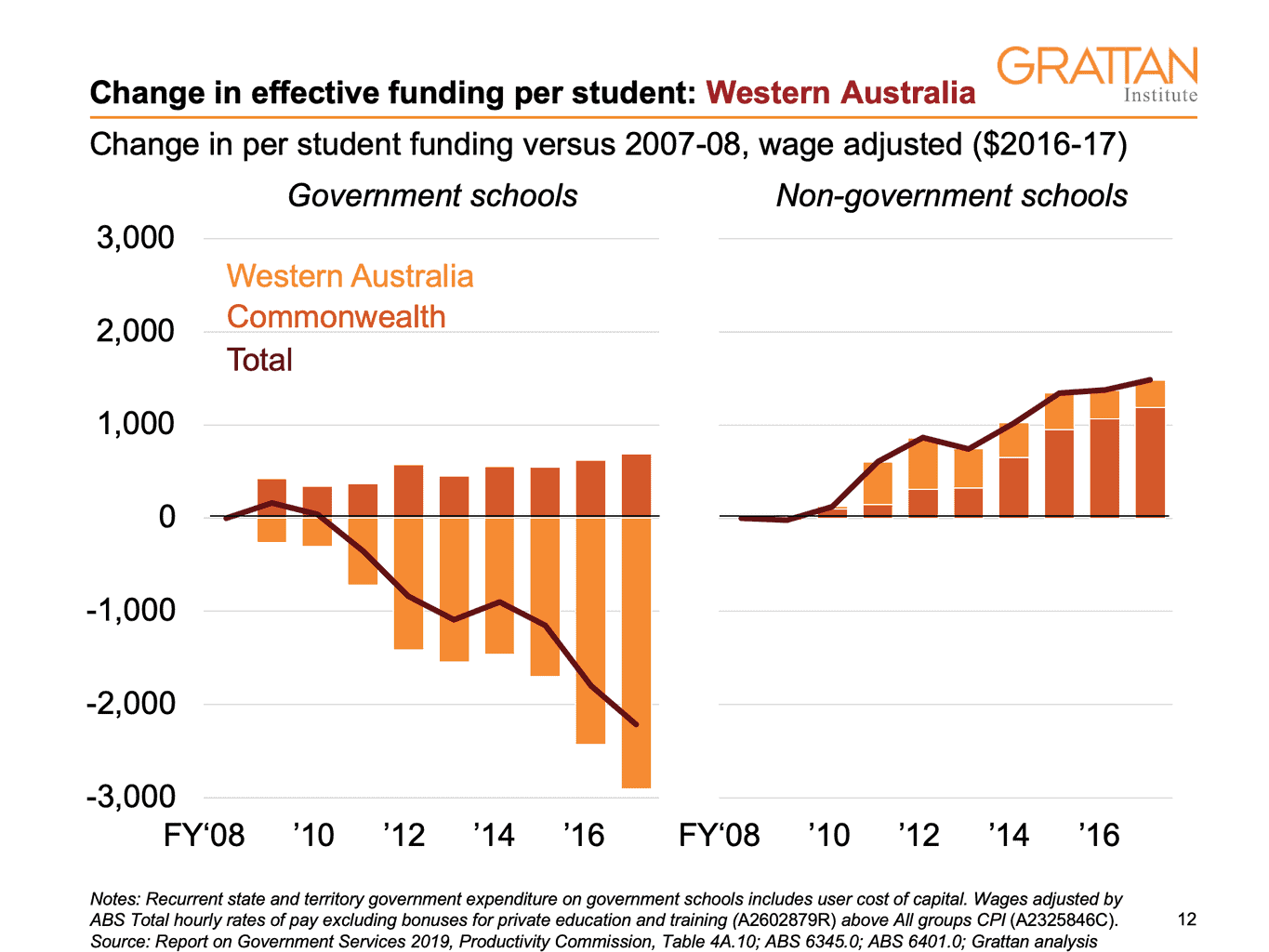 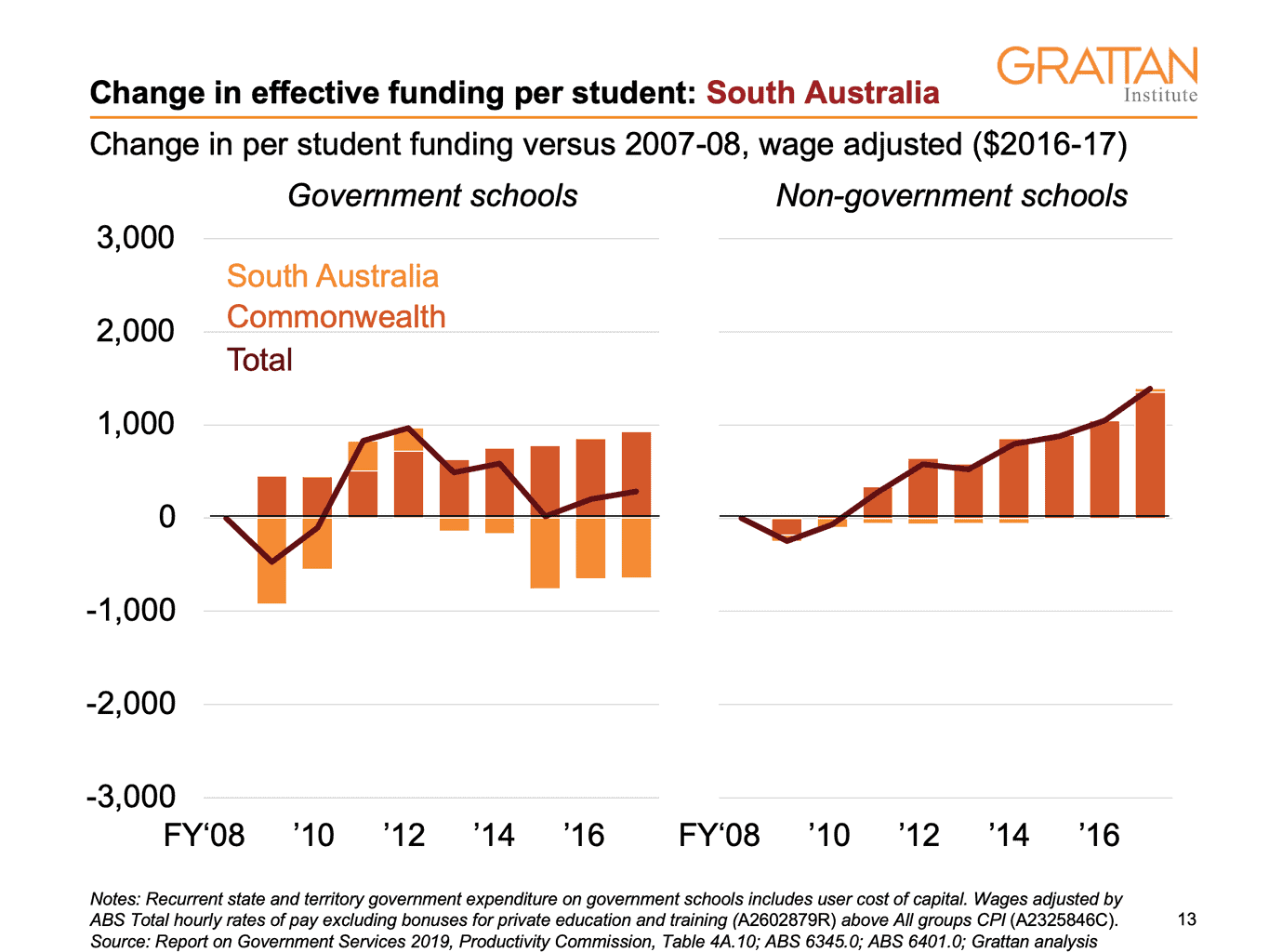 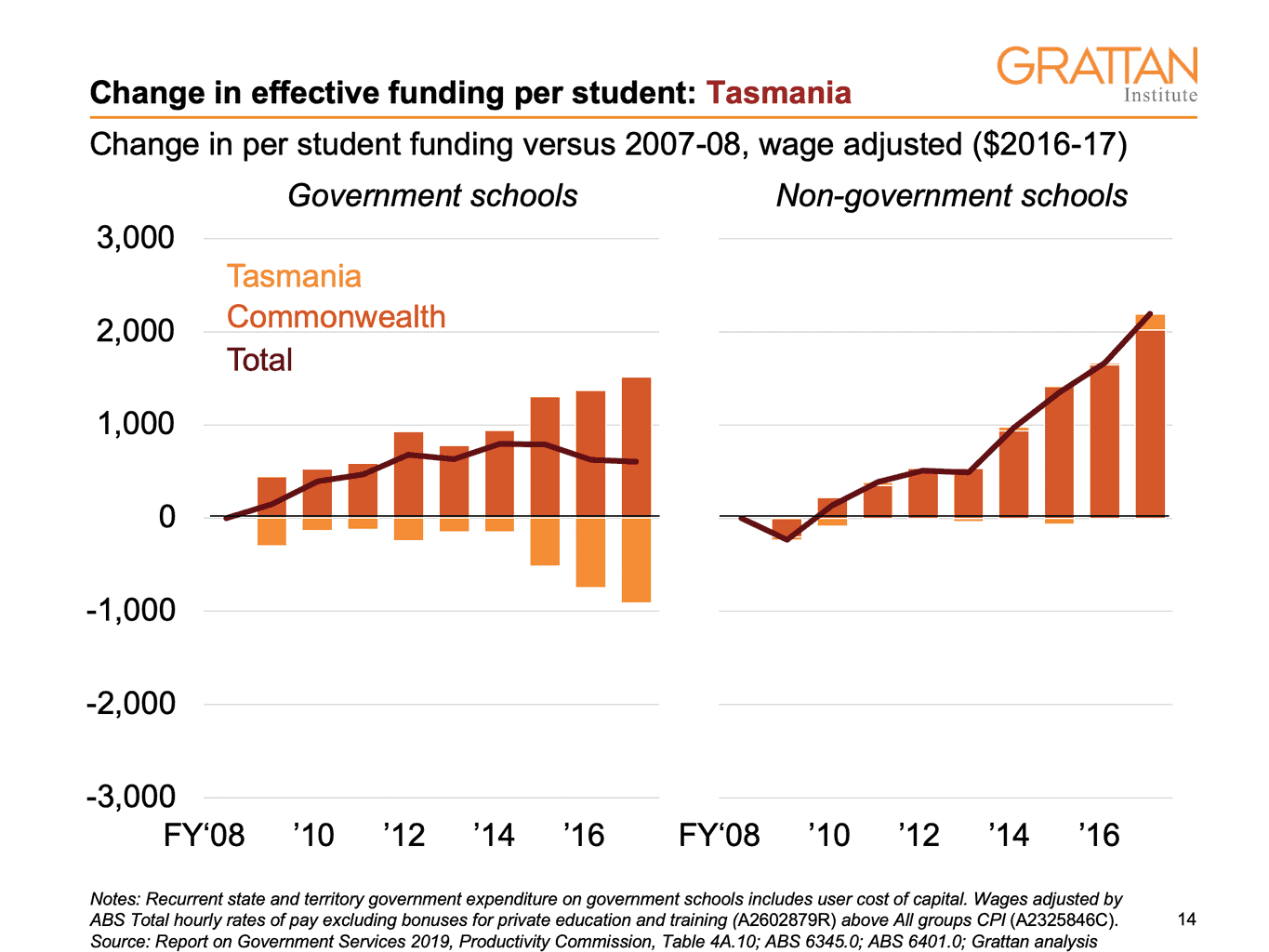 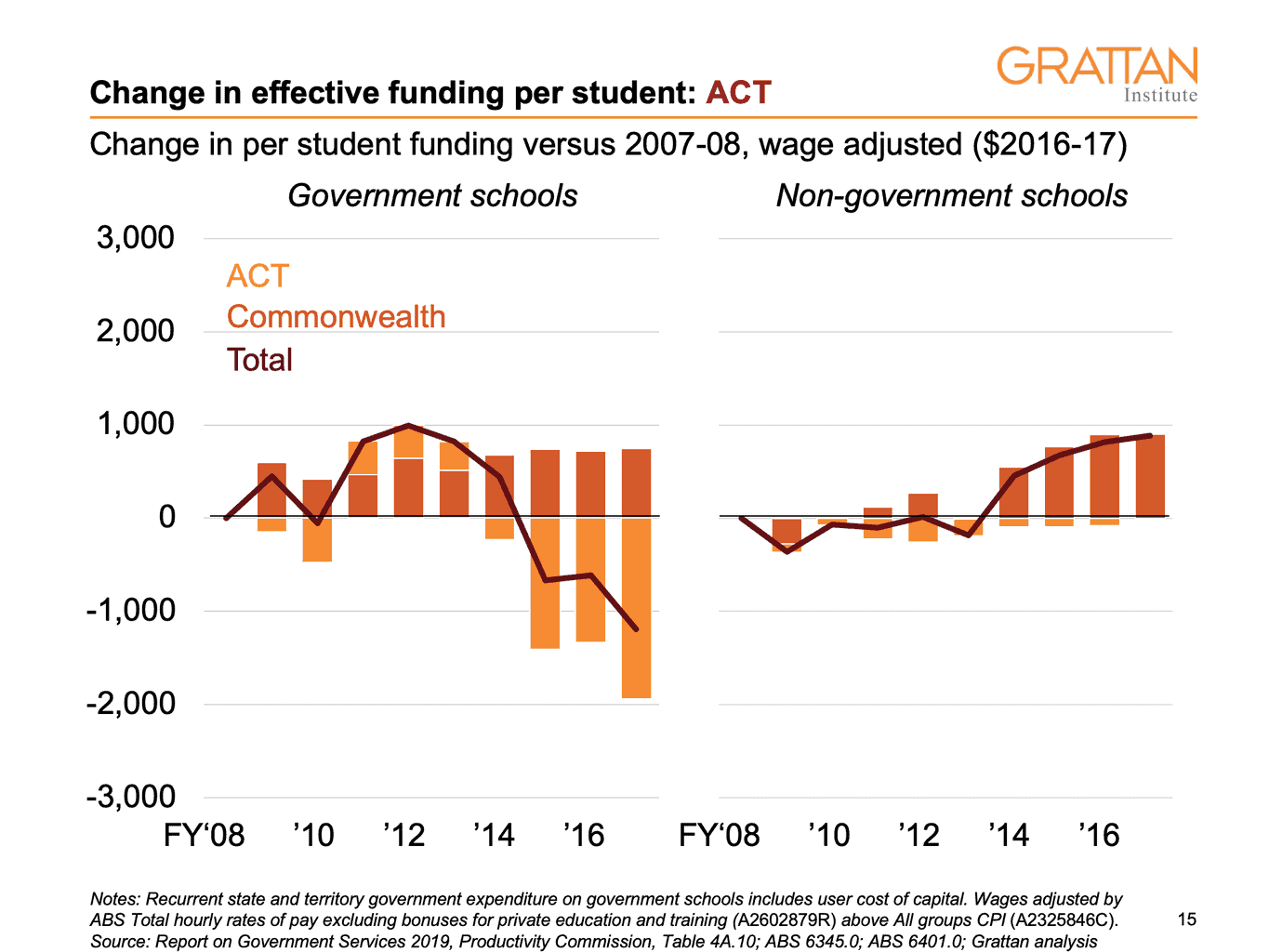 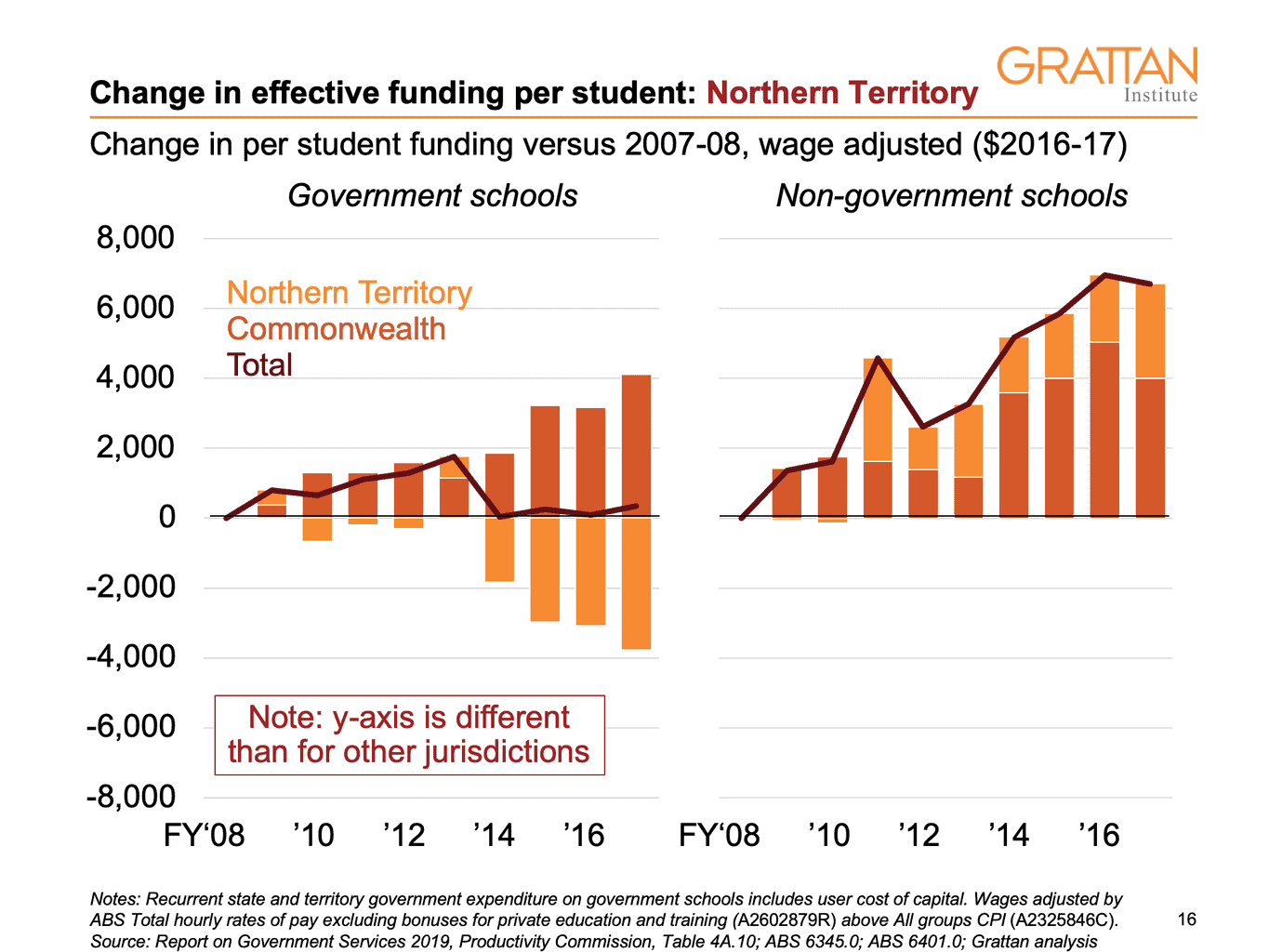