Why super is a burden on the budget - Grattan Institute

Why super is a burden on the budget

Published at The Conversation, Thursday 20 June

It is often claimed that Australia’s superannuation system will ease the budgetary burden of an ageing population. It’s certainly the impression put about by those pushing for an increase in employers’ compulsory contributions from 9.5% to 12%.

But new estimates suggest that for up to a century that wouldn’t be the case. Indeed, for decades to come, an increase in compulsory super contributions of the kind Labor is committed to and the Coalition has leglislated would add to, rather than ease, the burden on taxpayers.

That’s in addition to the A$20 billion a year such an increase would take from workers’ salaries each year, often without giving them a better income in retirement.

Here’s why super is a burden on the budget

It is evidence that will be crucial to the inquiry into Australia’s retirement system foreshadowed by Treasurer Josh Frydenberg.

It isn’t that superannuation doesn’t save the government money on pensions, it is that it costs it more in tax breaks than than it saves on the pension.

In 2013 the Treasury estimated that the extra revenue foregone from tax breaks after contributions were lifted from 9% to 12% would exceed the budget savings on the pension by 0.4% of GDP a year. 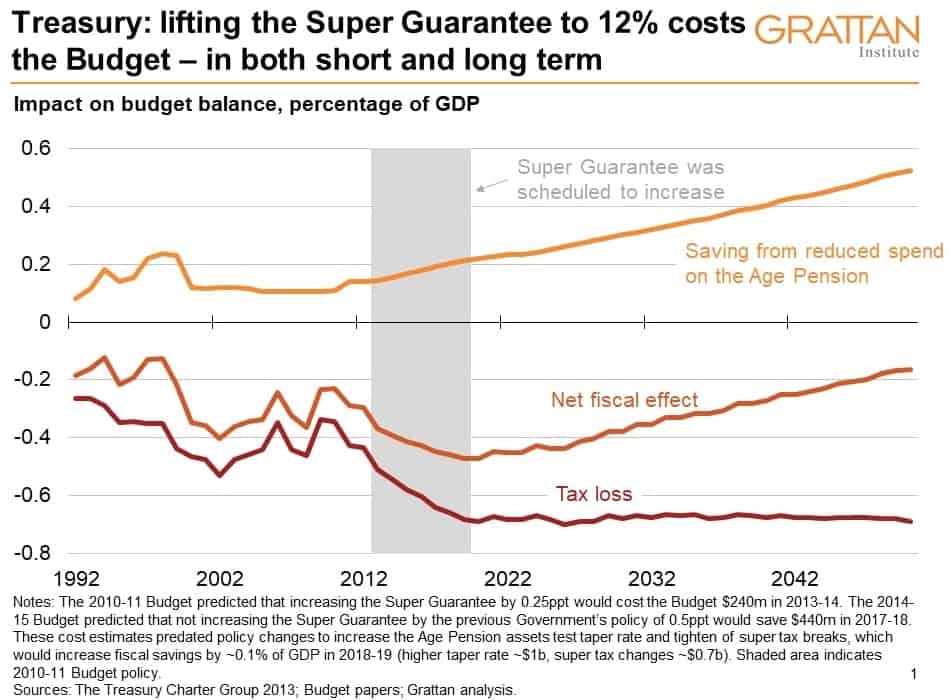 The latest projections are bleaker

It finds that lifting compulsory super contributions to 12% “will not have much impact on the age pension for many years”, and will save the budget only about 0.1% of GDP in lower age pension spending in the second half of this century.

In contrast, the extra super tax breaks from higher compulsory super will cost an average of 0.22% of GDP “throughout this century”. In other words, the government wouldn’t break even on compulsory super until well into the 22nd century.

And the latest Rice Warner modelling shows that lifting compulsory super contributions even further, to 20%, would barely change the future trajectory of age pension spending. 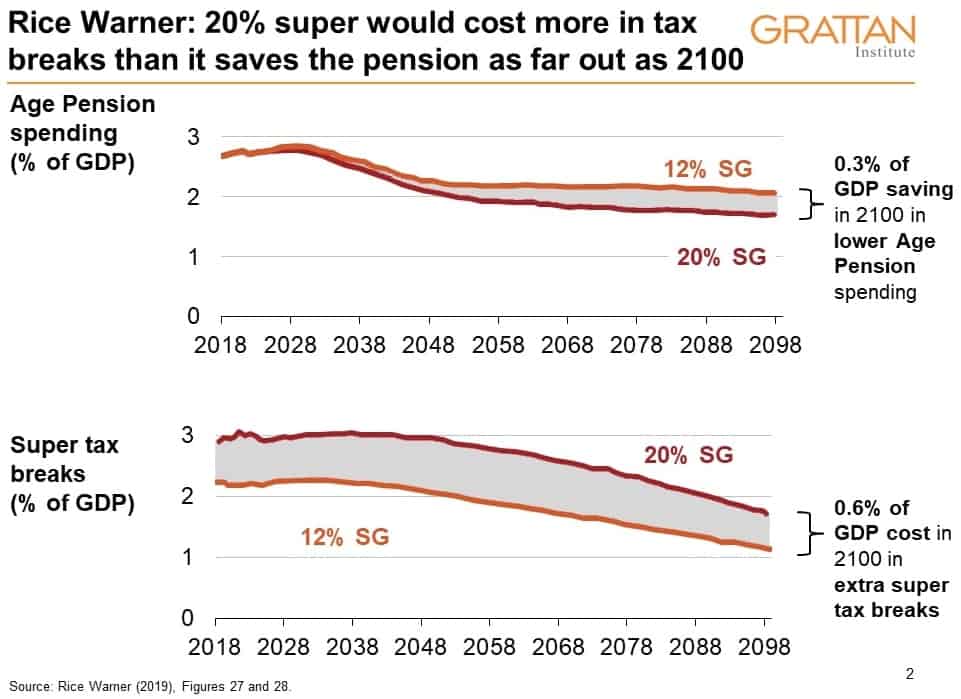 The Turnbull government’s package of super tax changes in 2016 saved only A$750 million per year.

We are indeed spending less on the pension

Spending on the age pension is slowing, despite the ageing of Australia’s population. Australia spends just 4% of GDP on pension benefits (including disability and other pensions) and is expected to spend just 3.7% by 2055. The OECD average is 9%. 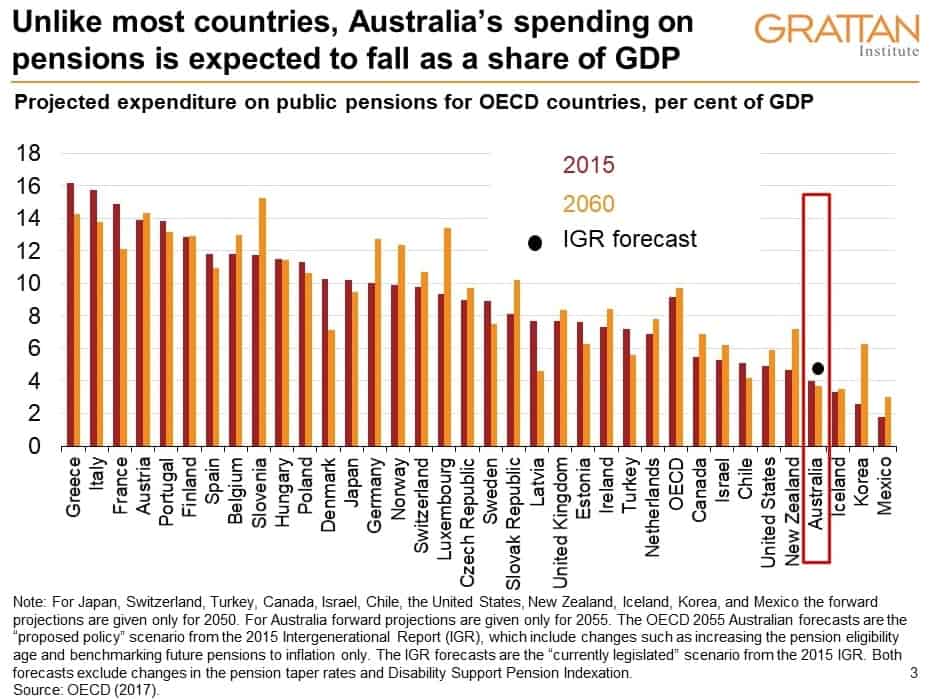 In the main, this is because of the design of our scheme. Australia’s age pension is more tightly means-tested than those elsewhere, and the maximum rate is the same for everyone, rather than set as a proportion of workers’ pre-retirement earnings.

And the income and assets test thresholds are indexed to inflation rather than living standards. If living standards grow 1% faster than inflation, as they have, the real value of the thresholds will fall by a third over a working life, cutting the pension to which Australians are entitled.

But that’s how it’s designed

Compulsory super has also played a part. Under the income and assets test, retired Australians with large super savings are often eligible for only a part-pension or no pension.

The Association of Superannuation Funds of Australia estimates that age pension spending is A$9 billion lower than it would be without compulsory super. $9 billion is a fraction of the A$30 billion cost of super tax breaks. Although there is debate about how to measure the total cost of those concessions, there is no debate that they cost the budget more than they save.

Lifting compulsory super to 12% of wages would cost even more, at a time when the budget isn’t flush with funds.

Whatever other arguments there are for lifting compulsory super contributions, and the Grattan Institute does not think there are many, the argument that it will safeguard the budget against the costs of ageing cannot be among them.