Why Australia should revert to demand-driven funding of universities

The capacity of demand-driven funding to manage micro-level changes, as well as bigger population trends, makes it superior to a block-grant system.

Published at The Conversation, Thursday 2 May

Labor says it will bring back demand-driven funding for universities if it wins this month’s election. Put simply, this means instead of the government providing each university with a fixed sum of money for teaching (which is what happens now), it would instead provide funds based on how many students have actually enrolled.

The Australian government operated a demand-driven funding system for public universities between 2012 and 2017. During these years, universities could enrol unlimited numbers of bachelor-degree students into any discipline other than medicine and be paid for every one of them.

Although universities did not have to meet demand from prospective students, they had much more freedom to do so. Moving to a demand-driven system is also referred to as scrapping the “cap” on government funding of university places.

Labor’s policy wouldn’t only give universities a funding boost, it would help universities adapt to and plan for future needs. Here’s what happened last time demand-driven funding was introduced, and why the policy changed.

Until 2012, the Commonwealth government had a supply-driven policy, also known as a block-grant system. This is because the government would decide on a block amount of funding it would provide to universities, and how many places the universities would have to deliver.

The government then divided the places and money between universities, which selected students based on the availability of places. The total number of places was always below demand.

Aside from limiting entry to university, the old block-grant system was criticised for being too bureaucratic and inflexible. In a much-quoted phrase, the economist Max Corden described it as “Moscow on the Molonglo” – a reference to Soviet-era central planning and a river in Canberra.

In most years, numbers of places allocated to universities were similar to the year before. This was the case regardless of student preferences, labour market trends, or a university’s strategy or performance.

The supply-driven policy’s limit on student places was a major constraint, but otherwise the system was only moderately prescriptive. There were some controls, such as limits on medical students. But generally universities could distribute their block funding between courses according to their own priorities.

A version of this block-grant system has continuously been used for government-funded diploma, associate degree and postgraduate student places. But fixed student-place allocations and money for bachelor-degree students were abolished for a demand-driven system in 2012.

Why was demand-driven funding introduced?

The 2008 Bradley higher education policy review recommended demand-driven funding. Julia Gillard announced the policy in 2009 when she was education minister, and it was phased in while she was prime minister.

The Bradley report argued a demand-driven system would let universities adapt more readily to student and labour-market needs. The government agreed, saying it wanted to move away from “dictating and rationing the supply of university places”.

One major reason the government gave for introducing demand-driven funding was to increase higher education participation and attainment rates. The government set a target of 40% of all 25-34-year-olds to have a bachelor degree by 2025, up from 32% at the time.

Without previous controls on student numbers the higher education system entered a transformational phase. Three universities – Australian Catholic University, Swinburne and Sunshine Coast – more than doubled their domestic bachelor-degree enrolments between 2008 and 2017. Another six increased their enrolments by more than half.

Domestic student bachelor-degree enrolments in 2017 were up by 45% from 2008, reaching nearly one-quarter of a million. 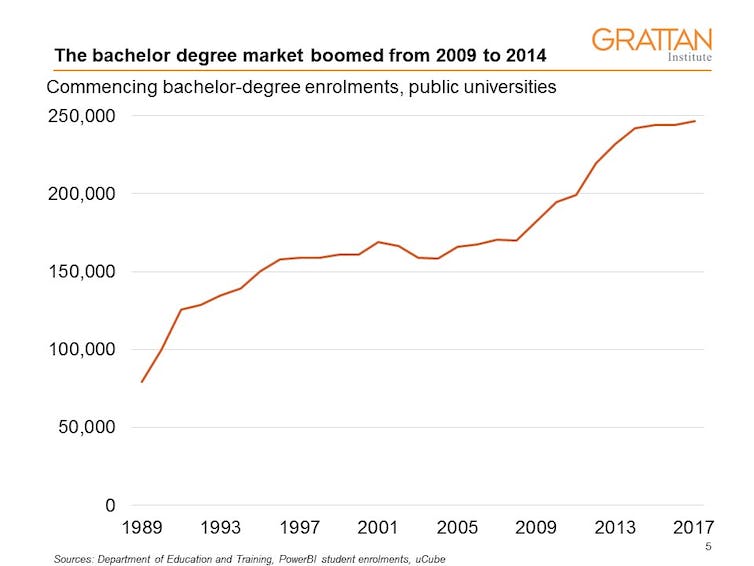 This enrolment growth put us on track to meet the original 40% attainment target. In 2017, nearly 42% of 19-year-olds were enrolled in higher education, up more than 10 percentage points from 2008. 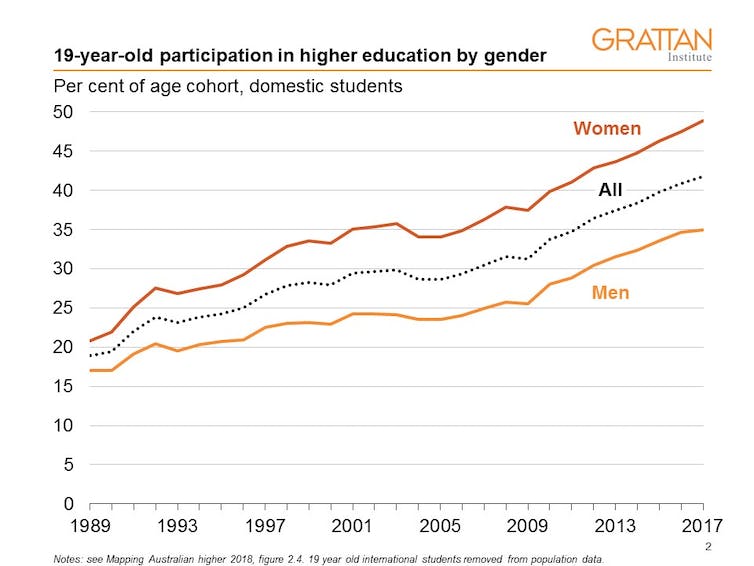 The government particularly wanted more students from disadvantaged backgrounds. The official equity statistics are based on geographic measures that provide only a rough guide to progress, althoughthey show some, with students from areas of low socioeconomic status increasing from 16% to 19% of undergraduate enrolments.A Grattan Institute analysis found that, in 2016, 25% of children of machinery operators, drivers and labourers were at university or already had a degree in their early 20s. That was up 9 percentage points from the decade before, but still well below the rate (61%) of children of managers and professionals.In line with Bradley’s hopes, enrolments rose in courses teaching areas of skills shortage, such as engineering and health. Health courses expanded the most – up by 73% in 2017 from 2008.Although demand-driven funding met employer needs, graduates did not do so well. Increased course completions coincided with an end-of-the-mining boom crash in jobs for young graduates. And 2014 was the worst year ever for recent graduate employment, with a third of those looking for full-time work unable to find it four months after finishing their course.Job numbers have since fully recovered, but recent graduate full-time employment rates remain below their historical average. But this wasn’t why the government scrapped the demand-driven model in December 2017.

Why did it end?

The policy ended because of cost. By 2017, demand-driven funding had caused spending to increase by more than 50% in real terms since 2008. From 2013 to 2017, every federal budget included an attempt to curb higher education spending, while keeping the demand-driven system.

But when the last of these attempts failed in the Senate in late 2017, the Coalition government used a fiscal emergency provision and froze bachelor-degree spending for two years, with population-linked adjustments from 2020 for universities that met certain performance criteria.

Effectively, this means we’re back to the block-grant system, except universities don’t have enrolment targets and can decide to reduce student places.

In the short term, the freeze shouldn’t affect students too much. Demand has been soft since 2015 and fell in 2018, mainly because fewer older people wanted to study. Early indications are that demand fell again in 2019.

Over the medium to long run, however, current policies would cause significant problems. In the mid-2020s, Australia’s school-leaver population will be larger than at any time in our history. And a shrinking higher education system would be unable to meet their educational needs.

Demand-driven funding is not just about total student numbers. Even when total domestic enrolments are going down, as they might be now, demand for some specific courses and universities will be going up. The capacity of demand-driven funding to manage these micro-level changes, as well as bigger population trends, make it superior to a block-grant system.